By ALEX VEIGA The Associated Press 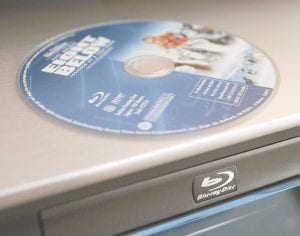 A Sony Blu-Ray disc player and a DVD of the movie “Eight Below” are seen in this photo. Warner Bros. Entertainment said it will release high-definition DVDs exclusively in the Blu-ray disc format, becoming the latest studio to reject the rival HD DVD technology and further complicate the high-definition landscape for consumers. (AP Photo/Reed Saxon)

Warner Bros. Entertainment has announced it will release movie discs only in the Blu-ray format, becoming the latest studio to reject the rival HD DVD technology and further complicating the high-definition landscape for consumers.

Warner Bros., owned by Time Warner Inc., was the only remaining studio releasing highdefinition DVDs in both formats.

Both formats deliver crisp, clear high-definition pictures and sound. But they are incompatible with each other, and neither plays on older DVD players, which means consumers seeking topquality playback face a dilemma.

Warner said it decided to go with Blu-ray because consumers have shown a stronger preference for that format than HD DVD.

“The window of opportunity for high-definition DVD could be missed if format confusion continues to linger,” Warner Bros. chairman and Chief Executive Barry Meyer said in a statement.

“We believe that exclusively distributing in Blu-ray will further the potential for mass market success and ultimately benefit retailers, producers and, most importantly, consumers,” the statement said.

The company said sales of Blu-ray discs in the U.S. generated $169 million last year, while sales of discs in the HD DVD format totaled $103 million.

About 60 percent of Warner’s sales of U.S. high-definition discs were Blu-ray titles and the other 40 percent were HD DVD, said Kevin Tsujihara, president of Warner Bros. Home Entertainment Group.

Outside the U.S., the divide was far wider, with Warner’s Blu-ray discs outselling titles in HD DVD in Britain and Japan, among other markets, Tsujihara said.

Sales of set-top high-definition disc players in the fourth quarter of 2007 also factored into Warner’s decision.

The company saw an acceleration in sales of Blu-ray players at the end of the quarter, particularly in December, Tsujihara said.

“We always viewed set-tops as the most significant indicator” of consumers’ format preference, he said.

Still, one alarming trend Warner keyed on was that consumers didn’t appear motivated by price reductions on high-definition disc players.

“When we saw that was not impacting sales in the level that it should have, and the consumer research that we did indicated that the consumers were holding back from buying either one of the two formats … we thought it was the right time to act,” Tsujihara said, noting that even sales of standard DVDs were affected because consumers appeared unsure over which format to go with.

“That was kind of the worst of all worlds for us,” he said.

There are some differences between the formats. Blu-ray discs can hold more data – 50 gigabytes compared with HD DVD’s 30 GB – but the technology’s new manufacturing techniques boosted initial costs.

HD DVDs, on the other hand, are essentially DVDs on steroids, meaning movie studios can turn to existing assembly lines to produce them in mass.

Warner Home Video will continue to release new titles in HD DVD until the end of May.

Pali Capital analyst Rich Greenfield said in a Web posting January 4 that he expects the HD DVD format to “die a quick death, versus a prolonged format war.”

“While we still expect overall consumer spending on DVDs to decline at least 3 percent in 2008, the risk of an even worse 2008 DVD environment has most likely been avoided by Warner’s early 2008 decision,” Greenfield wrote.

Studios and retailers have been choosing sides in the highdef format war in recent months.

Blu-ray got a big boost in June when Blockbuster Inc. announced it would stock only Bluray titles as it expands its highdefinition offerings.

Among the other major studios that have decided to go with Blu-ray: The Walt Disney Co., Sony Corp.’s Sony Pictures, News Corp.’s Twentieth Century Fox and Metro-Goldwyn-Mayer.

Viacom’s Paramount Pictures, which also owns DreamWorks SKG, dropped its support for Blu-ray and said it would start distributing films exclusively in the HD DVD format.