Blue Highway to play at Appalshop 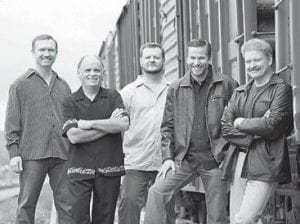 WMMT’s Bluegrass Express Live will present, once again, Blue Highway at the Appalshop Theater in downtown Whitesburg, on Thursday, Sept. 17. Doors will open at 7 p.m., and the performance will start at 7:30 p.m. The theater is located at 91 Madison Avenue. Tickets are $15 each and may be reserved on-site at the Appalshop, by calling (606) 633-0108, or via email at info@appalshop.org.

At the 15-year mark, Blue Highway is one of the most esteemed and influential groups in contemporary bluegrass. The band’s eight albums and live performances give proof to the stellar reviews, Grammy nominations, and numerous awards earned by the band since it first took the stage on December 31, 1994.

With a deep bench of songwriters, vocalists and instrumentalists, Blue Highway’s hallmark is an unwavering commitment to the ensemble, the “democracy of the band” that makes Blue Highway a powerhouse.

Individually, Jason Burleson (banjo, guitar, mandolin), Rob Ickes (dobro), Shawn Lane (mandolin, fiddle, vocals), Tim Stafford (guitar, vocals), and Wayne Taylor (bass, vocals) are masters of their respective roles. Together, in Stafford’s words, they are “a democracy in the best sense of the word” — five gifted artists selflessly merging their talents into a seamlessly brilliant group sound. As a result, the band moves from strength to strength, more mature and impressive with each new album.

Blue Highway has five gifted writers in its ranks. Ickes and Burleson turn out the heart-pounding instrumentals, while Lane, Stafford and Taylor give Blue Highway a depth of songwriting talent.

With eight highly-acclaimed albums to its credit, Blue Highway has garnered two Grammy nominations, a Dove Award, topped the Bluegrass Unlimited radio charts, and won numerous International Bluegrass Music Association awards. Refusing to coast on past glories, Blue Highway continues to push its music to new levels of accomplishment. Artfully balanced between tradition and innovation, it remains in the forefront of contemporary bluegrass music.

More information on Blue Highway can be found a t www.bluehighwayband.com.