Blue oval is still in the game 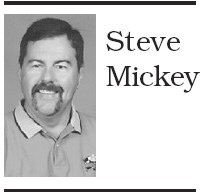 Sometimes lost in the excitement of the Sprint Cup season is the fact that the driver’s championship is not the only title being contested over the long 36-race schedule. There is also a title hunt for the owners, which is so important because it’s those points that lock the top-35 teams in the field each week.

Those two championship titles are no doubt the ones that you hear most about all season long from the media, but maybe more important is the seasonlong battle among the four manufacturers. Each week Chevrolet, Ford, Dodge and Toyota compete against each other in an effort to win the highly coveted manufacturer’s title, which brings with it a full year of bragging rights which can be used to sell their cars.

Chevrolet has dominated the sport in recent years by winning its fifth consecutive title last season and its 31st since the modern era of the sport began in 1972. Chevrolet has benefited from having the multi-team operations of Hendrick Motorsports, Richard Childress Racing and – until this year – Joe Gibbs Racing campaign its models in the series. Before Gibbs left for Toyota this season, the three organizations put 10 cars on the starting grid each week capable of winning not only races but also the championship.

Hendrick, Childress and Gibbs put together the kind of year for Chevrolet in 2007 that we may never see matched again. Chevrolet posted 26 wins on the year with nine different Chevy drivers making it to victory lane. The manufacturer was so dominating that it took the lead in the title hunt with Kevin Harvick’s win in the season-opening Daytona 500 and never looked back as it was able to clinch the title with 10 races remaining after Jimmie Johnson appropriately enough won the fall Richmond race, which just happened to be the Chevy Rock & Roll 400.

Gibbs’s departure from the Chevrolet camp to Toyota this season has taken some of Chevy’s domination away as Gibbs has already won two races this season including the first ever for Toyota at Atlanta by Kyle Busch. Denny Hamlin won the other race for Toyota and Gibbs, and he, Busch and Tony Stewart are all securely in the top 12 at this time.

While Gibbs has taken up the slack for Toyota, Roush-Fenway racing has been left alone to carry the banner for the Ford camp. Ford is led by Roush’s five teams along with the two teams of Yates Racing and the one-team operation of the legendary Wood Brothers. In reality, Ford’s presence in the series lies with Roush as Yates’s two-team operation is scrambling to find sponsorship for both teams to finish out the season and the Wood Brothers¿ team is struggling just to make the race each week as they are out of the top 35 in owner’s points.

Ford definitely can’t put the same number of cars in the starting field at each race as some of the other manufacturers, but as long as Roush unloads his five Fords at each stop on the schedule there will always be the chance of seeing a blue oval make it to victory lane. Carl Edwards’s win at Texas in the Samsung 500 on Sunday was his third win of the season and moved Ford to the top of this season’s win list as it broke a tie with Toyota as each manufacturer entered Texas with two wins.

The win also moved Edwards into the all-important top 12 in the 10th spot. What makes that all the more amazing is that he was given a 100-point penalty after his win earlier in the year at Vegas after his oil tank cover was found to be off during post race inspection. Without the penalty, Edwards would be in fourth place just 84 points behind the leader. Fellow Roush driver Greg Biffle joins him in the top 12 in ninth with teammates Matt Kenseth in 13th and David Regan in the 17th spot. Only Jamie McMurray is struggling in the points at this time as he now sits in the 25th spot, but that is an increase of 11 positions over the last two weeks.

Roush may or may not have enough firepower to lead Ford to the manufacturer’s title this season, but the organization is going to have a big say in who makes it to victory lane each week and what driver ends up as the title holder.