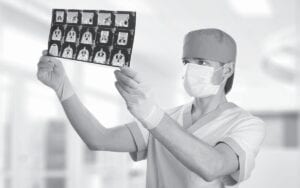 I’m just fine with X-rays when it comes to taking images of body parts, even when I sometimes have to go back and have them do it again. That has only happened two times out of several dozen but I’d rather have to walk barefoot 40 miles to a hospital in Lexington for an X-ray than undergo a “scan” of any sort at someplace close by, especially if it is going to cover up my head.

Unfortunately an X-ray has no utility when it comes to most of my afflictions. Thanks to three strokes and Mr. Parkinson, I’ve been through six MRIs to have my head examined and every one of them have made me experience claustrophobia so badly that I could only endure them with some sort of mind altering drug that made me cease caring what they did to me but caused me to have several hours of severe headaches and nausea after I got home.

Strangely enough, I’d had no serious reaction to an MRI I’d had before Parkinson’s came to call. Not that I’d wanted to do it again but, while nearly an hour of very loud clanging and banging while totally closed in a huge steel coffin had been a major aggravation, it was far from being unbearable. Post Parkinson’s, I simply can’t tolerate it without a shot of serious joy juice.

Most of my CT scans over the last several years have involved intravenous injections of a dye that makes me feel absolutely sure I am going to pee all over myself and wet the machine down. That has never happened but a couple of times I have felt so sure it had that I’ve raised alarms and they had to start over. The only thing worse than having a CT scan is having to do it twice as far as I’m concerned, but at least there is no banging and clanging and, before last week, the scanner had never been completely over my head.

Nor had it ever taken more than 10 or 15 minutes, start to finish. Last week I had to take an IV injection that lasted 15 minutes and then wait three hours for a full body bone density scan that they told me would last for at least 35 minutes when I came back. The upside was that I felt absolutely no sensation from the injection and no sense that I was going to wet my pants.

I spent the next three hours dreading the fact that my head was going to be face up about three inches from the scanner. While Loretta was taking pictures of geese, ducks, a great blue heron and the landscape of Lake Reba in Richmond, I sat in the car, parked in a shady spot beside the lake, trying to figure out how I might more easily endure the rapidly approaching full body scan.

After we got back to the hospital I still hadn’t come up with anything and asked the radiologist if she might administer some joy juice. She assured me that my head was only going to be under the scanner for less than five of the 35 minutes it would take to do the full scan and suggested I simply close my eyes and think happy thoughts. She said she’d tell me when the scanner had gotten past my face if I wanted to open my eyes and if that didn’t work they’d figure something out and start over. She had already told me that if I moved anything under the scanner, it would have to be redone.

I decided then and there, come hell or high water, I was not going to do anything that might prolong the scan. Immediately after the room went dark my nose began to itch but I dared not reach to scratch it. Sheer torture ensued but determination saved the day.

Then I decided what I needed was a mental bluegrass music concert. I started with Flatt and Scruggs’s “Cabin on the Hill” then into Bill Monroe’s “I Haven’t Seen Mary in Years” with all the instrumental breaks included. I switched off to Larry Sparks’s “A Face in the Crowd” and liked it so much I did it again before taking off with “Blue Virginia Blues” and another encore where I just barely kept from tapping my feet.

Midway through “John Deere Tractor”, the lights suddenly came on and the radiologist said, “Wow. You nailed on the first try. Congratulations! That hardly ever happens with this one.”

I didn’t tell her how much I enjoyed the concert but the whole thing took exactly 35 minutes. I checked my watch as soon as she handed it back to me because it felt like no more than 10. I think I’m onto something when it comes to CT scans.