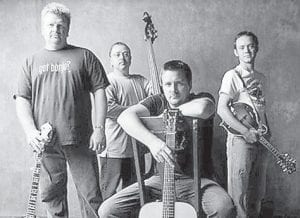 TO PERFORM – New Found Road will perform at WMMT’s “Bluegrass Express Live” on Thursday, April 17, in the Appalshop Theater in downtown Whitesburg. The concert will also be broadcast on WMMT-FM, beginning at 7:30 p.m.

New Found Road, one of the most exciting new groups on the national bluegrass music scene, will perform their high energy, driving bluegrass on WMMT’s popular “Bluegrass Express Live” on Thursday, April 17, in the Appalshop Theater in downtown Whitesburg. The concert will also be broadcast on WMMT-FM, beginning at 7:30 p.m.

New Found Road’s sound is rooted in the deepest traditions of bluegrass and bluegrass gospel. In fact, though they thrive on all types of bluegrass, they have recently been honored with the prestigious SPBGMA Contemporary Gospel Group of the Year Award. They are recognized for soulful three-part harmonies, great songwriting and stellar picking.

“Life in a Song”, their recent release on the Rounder label, exhibits their balance of the timeless and modern elements of bluegrass. It was produced by Rob Ickes of the super-group Blue Highway, and Ickes’s dobro can be heard on the album. New Found Road performed with Blue Highway at the Mountain Arts Center in January.

Appearing with New Found Road will be one of the area’s most exciting and popular groups, Fastlane. The Knott County-based group will be performing songs from their CD “Left This Town”, including their big hit, “Tina at the Teardrop Inn,” written by Williamson, W.Va., native Mike Wells.

“Bluegrass Express Live”, since 1986, is a live, warts-andall performance broadcast worldwide by Mountain Community Public Radio, 88.7 WMMT, a part of Appalshop. Admission is $15 for adults and $5 for students. Reservations for the April 17 show can be made by calling the Appalshop at 606- 633-0108, or emailing wmmtfm@appalshop.org.