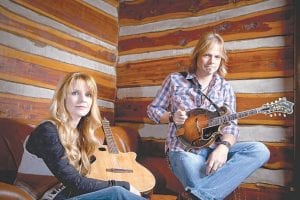 Bluegrass duo The Roys from Massachusetts have released their song “Coal Minin’ Man.” The video for the song was filmed outside TECOowned Perry County Coal’s E-4 No. 1 mine in Hazard. The song appears on The Roys’ debut album, “Lonesome Whistle.” The duo will return to eastern Kentucky this summer for a music festival in Prestonsburg.

Back in February a Bluegrass duo from Massachusetts spent a day filming near a Hazard coal mine for their new single, “Coal Minin’ Man”.

Lee Roy, half of the sibling group The Roys, said he and his sister, Elaine, will never forget their trip to Perry County Coal’s E-4 No.1 mine in Hazard. Although The Roys didn’t have time to take a safety class and tour the TECOowned underground mine, they met coal miners and watched them load onto a mantrip.

Lee Roy said he wanted to write a positive song about the coal mining industry. He said to make the video authentic the group needed to film near an operating mine.

“It was a perfect way to make the imagery fit the song,” said Lee Roy. “This song is just paying tribute to the every day coal miner.”

Elaine Roy is excited about the song “Trailbrazer” which she co-wrote and used her idol Dolly Parton as inspiration for the song.

“I’m the biggest Dolly fan and she is definitely a trailblazer,” said Elaine Roy. “This song is for the dreamers like me.”

Elaine Roy began singing at five years old and Lee performed publically with a bluegrass band when he was nine years old. They credit their grandmother who played the fiddle for their interest in bluegrass music.

The Roys opened for George Jones when he played at the Pikeville Expo Center a few years ago. The Roys are excited to come back to eastern Kentucky to perform at the Blue Moon Mountain Bluegrass Festival, an inaugural event debuting the year of the 100th anniversary of Bill Monroe, the father of bluegrass. The five-day festival is set for July 27 – Juy 31 at the Prestonsburg Equine Center at Stonecrest. “Eastern Kentucky is beautiful and we can’t wait to get out there and play some music,” said Elaine Roy.

A limited amount of camping is available with electric and water resources.