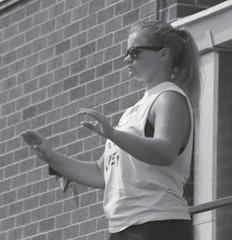 Rose Ballard’s granddaughter Kate Nottingham is in band camp for the last time as she will be in college somewhere next school term. Where has the time gone? She is the daughter of Scott and Anna Nottingham.

Grab that favorite beverage and sit down. Let’s visit a bit, as everyone needs a break. Oh, what I would give for a hot cup of coffee as I prepare to start this column.

How’s everyone enjoy the almost fall weather in these days that should be summer? While glancing back through other articles that had been written a few years ago, to be honest the weather situation really isn’t that much different.

Another Osborne Bros. Bluegrass Festival has come and gone. At least this year I was able to attend.

I want to start by saying a humongous amount of thanks to Dean Osborne for always doing such a great job for making the festival a huge success.

Dean does so much for the young people as well as the older one. This fills my heart with so much joy.

I spent Thursday through Sunday morning at the festival, Yes, the writer of this column turns old hippie at a bluegrass festival as I camped in my car.

When I pulled into my favorite place to park at the festival, a car pulled up as I was unloading my chair. Oh, what a pleasant surprise. They were the same ones I had sat with in 2018, Millard are Margarite, except this time they had someone else with them. Once again we spent three days enjoying music, except they became my caretakers, helping carry my chair and bags to and from the car. They traveled from somewhere close to Richmond each day.

This was one of the most relaxing few days I’ve had in some time. Believe me when I say I needed the time away. I found that I had absolutely no cell phone service. I walked about a quarter of a mile down the road, then up a steep hillside to try to get service. I remember being there several years ago in the same situation.

Thursday afternoon three people from Camp- bell’s Branch Community Center came to the festival, and chose a seat in the row close to me. At the time I had only seen the woman across the room at the center, not even knowing her name. She had her phone in her hand, and I asked if she would please do something for me. She replied sure, and I explained that I had no cell service, would she text my son Keith and tell him I had made it to my destination and I was alright.

She was afraid of not having reception to text, so I gave her Keith’s number and she called and gave him the message. I later found her name is Elaine. We did share a bit of conversation. Her brother knew my dad Clayton Hall and my brother Wallace Lee.

Friday, I met another person from the Whitesburg area, Wendell Fields. His mother attended Stuart Robinson School which is now Cavalry Campus that I stay at when I am in the mountains.

Saturday, two guys sat behind me from Campbell’s Branch. Their faces were familiar but I don’t remember their names, and didn’t really want to talk as I was interested in the music.

I did walk across the building to tell Shawn Stamper how much I enjoyed his show. I hope I am not saying the wrong name, as Shawn was talking to a guy, I believe his name is Eli. Anyway he had a bad accident from falling about the same time I had the car accident. Whatever his name is, he is one of the nicest people I have ever met. It is good to see he has made a recovery.

Shawn is sort of amazed I will drive the distance I do to a bluegrass festival to see their band, then camp in my car. Yes, I can afford a motel room in Hazard or wherever, but I don’t want to drive the distance every morning and every night. If I wasn’t afraid to drive a van — I had a nice one and sold it a few years ago — I would be camping in it.

Being small has its advantage, however this Honda Fit doesn’t have as much room as my other cars. I still manage to rest. To be honest I slept more hours than I do at home.

When I bought the 2018 Hyundai it didn’t have a CD player. I purchased a portable DVD player which has a car charger and an electric device so I could play my CD’s. Then I would use it when I stay at the campus, as there’s no television.

Since I bought the Honda Fit, which has a CD player, the only time I’ve used the DVD player is with the electric plug in it. I keep it in a special bag, ready to travel when I head to the mountains I call home. Well you know something, I decided to take it with me along with a couple of movies about Kingdom Come, etc. I haven’t watched.

Thursday night after the show, I snuggled in my car, as happy as a bug in a rug, and decided to watch a movie. Well to my surprise I couldn’t plug the electric plug in. I had completely forgotten about the car charger unit. It has been over two years since I’ve used the car charger and I have no idea where I put it.

The bands were great, however I must admit I have two favorites, Larry Efaw & the Bluegrass Mountaineers and Sunrise Ridge which features Jack Adams on the banjo. Jack did an awesome job, performing with both bands back to back.

My heart ached as if there were holes in heaven’s floor and angels were watching. I know Beverly Adams was watching with pride.

Larry Efaw and Shawn Stamper are such an influence on the younger generation. It is just wonderful.

In time I hope Jack Adams will learn to relax just a tad bit more with Larry’s band. I don’t mean to sound like a know-it-all. I was married to a musician, who also drove a bus for Larry Sparks. Being on the road and traveling is hard on band leaders, members and their families.

It is difficult for musicians to entertain for our enjoyment, especially when they do several shows consecutively with no breaks in between.

Natalie Tomlinson is really a great musician, and she is also a very good singer. Whitney Stamper Cornett captured my heart and attention a long time ago. Whitney is an wonderful singer and bass player; she is going to make a great doctor. Shawn Stamper is such a great band leader, guitar picker and singer. As I said before, Shawn Stamper is a great influence. I am proud to be acquainted with Shawn and Flo.

I met Larry Efaw over 20 years ago, along with his young son Stanley and Larry’s dad Edward Efaw, who performed in the band for many years. I also met Larry’s wife Lisa, who treats me like one of the family.

I’ve been invited to have supper and stay with them on the bus. There’s no way as there’s just room for the band, not families, nor in my case friend. I am not crowding in.

Larry Efaw has always had a top notch band. I must say I enjoy Adam and his wife Mikayla Burrows and the 15-year-old guitar picker. I am sorry I forgot his name.

All the bands were top notch except one band female band leader, who has the personality of, or I should say no personality. She sure is in the wrong business.

I’ve met some of the greatest bluegrass and country singers down through the years that seemed like best friends for a little while, such as Dolly Parton, Loretta Lynn, and Lynn Morris just to mention a few. I also met Patty Loveless at Pikeville.

Oh I was a brazen woman when Adam and Mikayla were putting Larry Efaw’s merchandise on the table. I noticed Larry had shirts, and I went back to the car to get money. When I returned they had finished, however they had placed a shirt for me and gone back to the motor home. As I sat there a mischievous streak took over. Now I hadn’t paid for the shirt, and I was wearing a Sunrise Ridge shirt, Larry’s band performed before Sunrise Ridge, and I walked over to the table, got the shirt that Adam and Mikayla had put behind something on the table for me.

I wore Larry’s shirt over Sunrise Ridge. I told the couple behind me I was doing a strip show when I switched for the second show.

This may be the last show at the shelter, as there’s plans to move up on a mountain. This is a wonderful place, but I guess they know what they are doing and didn’t ask anyone for their opinions. They need more space for parking.

Please keep the Calihan family in your prayers as Ann Calihan fell, breaking her femur in two places.

Hello to Hayward Day and Kim. Hayward has pneumonia, and he wasn’t able to attend Ann and Johnny’s daughter Carol Dieckman’s funeral.

Hello to my usual group. Mike and Marcia Caudill, I still hear the mountains calling so keep a marshmallow or two handy. Even though there’s no square dancing, who knows where or when I will turn up.

Buddy and Bernice, I hope things are better with you. I tried to call Sunday and no answer. Just save a hug for me, don’t give them away to all those beautiful young girls

Hello Tommy Tindell. I hope you are doing as well as can be expected.

Price Rogan, I hope you had a safe trip home. I know you enjoyed your brief stay, and enjoyed visiting Tommy.

Time has once again slipped up on me. I have a busy day ahead. I will continue next week about Osborne Bros. Festival.