By DUANNE B. PUCKETT 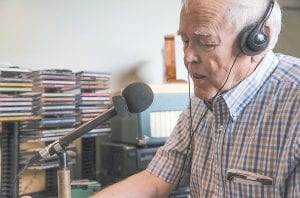 “Let’s get some music going for some atmosphere in here.”

Where would you expect to hear this statement: A bar? A dance? An assisted living center?

If you guessed either bar or dance, you are wrong.

Paul Morris has his own studio in an L-shaped corner of the TV room at Amber Oaks Assisted Living in Shelbyville. There are shelves with hundreds of CDs as well as some vinyl records and even some 78s. “Look here, an authentic Gene Autry,” he said, plucking one out of its American Record Company sleeve to show. “Nobody in the world probably still plays these.”

Morris does, and has been for 38 years as a disc jockey of a bluegrass and gospel music show that still airs on WXKQ-FM in Whitesburg. He got the part-time job at the radio station because he complained.

He and his wife, Ethel, moved to Letcher County in 1973. “Had a nice hometown station with wellknown artists, Ernest Tubb and Hank Snow. I got acquainted with the station manager and bugged him and bugged him to play more gospel.” The conversation, according to the 78-year-old Morris, went something like this: 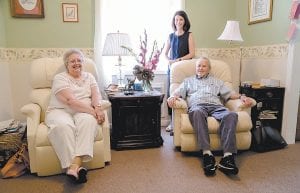 Manager: “Come do it yourself.”

Manager: “Can you operate three buttons?”

His daughter, Mary Ann Gramig, was thrilled to have him saluted as an example for Father’s Day last month. She said he is also “very accomplished at most musical instruments. Mandolin is his instrument of choice.” On occasion, Morris continues to play with the Lawson Brothers who visit Amber Oaks once a month. In 1960, he played with the Backwoods Boys, playing guitar and singing tenor. In 1965, he started with the Kentuckians for five years.

Morris’s real vocation was in agriculture, after receiving a degree from Berea College with the desire to teach vo-ag classes. “A position did not come up and someone suggested extension service,” he said as his daughter complimented his work by displaying a wooden plaque he received in 2009 as a Lifetime Achievement award recipient from the University of Kentucky, which operates the Cooperative Extension Service.

He shrugged his shoulders as if the award was nothing to brag about, but his daughter chimed in, “He is being too modest” as he quietly added, “I was the youngest agent to ever win this certain national award one time.”

He spent two years in Lewis County before moving onto another career: with Hooker Chemicals and then Kraft Foods. He returned to Letcher County as extension agent in 1973 and remained there until retirement in 1997. That career path came about in 1958: graduating from college, getting married and being drafted into the Army. “I saw the world… heh heh … was stationed at Fort Knox the whole time.”

Paul Morris isn’t sure how to answer where he’s from. He was born in his great-grandfather’s log cabin in Wolfe County “close to the banks of the Kentucky River” and then lived in “an out of the way place” in Breathitt County and then attended Lee County High School, “so I have ties to all.”

He saw Ethel sitting in the back seat of a car when he was 17 years old and she was 13. “He wanted someone to go to the prom with him. I said I’d have to ask my mother and get back with him,” Mrs. Morris began the story. “She said that I was too young. Somewhere in the conversation of my hounding her, his last name of Morris came up. That was her middle name so she said, ‘I might like to meet this young man.’ She ran a restaurant, he came by, she said yes.”

Morris looked across the table in the café at Amber Oaks to his wife and said, “She was a cute girl, really was. And she seemed older and more mature, not flighty like other girls.”

They knew each other through school, after he transferred from the one-room school he attended at Puckett Bend. “Went all eight years there. No road to drive on, only horse and wagon could get you there. Enrollment kept dwindling… I was the eighth grade class… heh heh… top student and bottom student!” he laughed.

He obviously was “top” because of his professional career span, his finger on music and his involvement in the communities where he has lived: Rotary Club, Chamber of Commerce, Farm Bureau Board, etc. Gramig added, “Then Mom got breast cancer and that took center stage.”

Music Makes His World Go Round

They had made plans to move from Letcher County to Florida to be near their son, Adam. Ethel’s medical treatment occurred there – right along with Morris’s music program, which still airs two times a week. He said, “I had already finagled enough with the equipment to do it from home, so I just moved the equipment and continued full steam ahead.”

The three family members looked at it each other and nodded in agreement as he said, “I claim to be the oldest living bluegrass radio broadcaster with the longest running show … and I bet, the only one recording in an assisted living home!”

Mrs. Morris bought him his first two albums at a drug store. “I still have them and still play them,” he said. The collection grew from there. Mrs. Morris explained she measured the walls in their new home in Florida to accommodate the 20,000 albums and 8,000 CDs her husband had, “I didn’t figure in that he’d keep getting more.”

Gramig explained that when she orchestrated the move from Florida back to Kentucky, her father donated the majority of his collection to the Kentucky School of Bluegrass and Traditional Music in Hyden. She said, “It was the second largest collection for this genre known to exist in the U.S. in November 2013.”

Gramig figured on setting up a studio for her dad by finishing the basement in the home she shares with her husband, Keith (the Army ROTC commander at Martha Layne Collins High School in Shelbyville) and their two children. She smiled and said, “Dean (Windsor, executive director of Amber Oaks) said that was ridiculous, he would set him up here.”

Morris explained, “Bluegrass is music in itself. Gospel is only a part of it. That’s my favorite. Still playing some I grew up with. A lot of a capella.”

He again uttered his signature “heh heh” laugh when he admitted, “My religious background is really mixed up. My Dad was from a Missionary Baptist, my Mom from Church of Christ.”

His program lineup on WXKQ 103.9 in Whitesburg is Bluegrass Ballads each Thursday at 7 p.m. and Hymns from the Hills each Sunday at 8 p.m. In Shelbyville, on WXLN 93.3, Morris plays music at 7 o’clock each Sunday morning.

Morris tapes all of his shows in advance — “Usually three weeks ahead” — so he re-enacted the scene. Taking out his hearing aids, putting on headphones, using a lilt to his voice as he spoke into the microphone and placing music in the player or on a turntable. “How does that sound?” he asked but quickly answered himself. “Pretty good!” he said as he quietly sang along with the music.

He times every action with a stopwatch that he said must be 20 years old. One CD he slipped in featured a young girl’s voice saying, “You are listening to Paul Morris ….” It was his daughter at age 14. He laughed his standard “heh heh” and asked, “How about that voice?!”