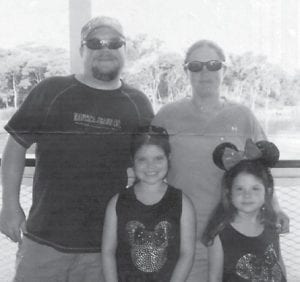 Lana Holbrook Banks recently completed requirements to become a licensed professional counselor in Virginia. She is pictured with her husband, Keith, and daughters, Taylor and Emmeleigh.

I guess that blasted groundhog must have seen its shadow as I hear it is predicted six more weeks of bad weather. As if we didn’t know and need a groundhog to tell us that winter isn’t going to give up yet.

I hope how quickly Mother Nature or whatever lets us out of this cold grip that won’t let up. I am really looking forward to spring and the budding of the trees, and flowers.

I spent Friday and Saturday at a bluegrass event called SPIGMA, which is held at the Sheraton Music City Hotel in Nashville, Tenn. This is my third year of going.

My friends Art and Joanne Peters from Greenville invited me to go with them. We stayed at the Sheraton, which meant we didn’t have to leave the hotel. There are main attractions of big name bands, but you can find music in the hotel lobby, the hallways and lots of rooms.

People from all over the country come to this event. I met several from different parts of Canada, Georgia, Tennessee, Kentucky, Indiana, Illinois and too many to remember. The best part is walking into the hotel lobby and seeing so many familiar faces.

I was very surprised to see Tony Hale and Bubba Griffin walk in the door. I didn’t get to listen to the guys jamming as I was like a butterfly flitting from here to there. I did get to talk to Ronnie Stoneman from ‘Hee Haw’ along with Mona Jo Griffin who was in the lobby playing banjo with others.

This year there were lots of young children who were fantastic musicians. There were two little boys who are brothers, ages eight and 11. They could really play the fiddle and the mandolin. They are from Canada.

I had to laugh as they had white hats on that were almost as big as they were. I used to hear that you wore black hats in winter and white hats were for summer.

When I got on the elevator there were three musicians who were playing a fast tune. I laughed and told them that if you can pick music in the elevator then I can dance, and I did dance a few steps. About a half hour later I went back downstairs and they were still riding up and down in the elevator, so I guess this could be called elevator music.

Saturday evening, Art, Joanne and I went to a famous restaurant called Cock of The Walk. Your food is served on aluminum pie plates, and your beverage in small aluminum cups. This is my third time going there.

The weather in Nashville has been a little unusual as it has been on the cold side. If I remember correctly, they had snow when my friend and I were in Nashville about this time of year. We went traipsing all over Nashville in the snow.

Sunday morning, they had a severe weather alert so Art and Joanne decided to cut short their plans and we left early. As we got close to Louisville it begin to sleet a little so to save them time I called my daughter Anna Nottingham and asked if she could meet us and bring me on home. I got to see my grandkids, but little man Kyle was sound asleep.

I am seriously considering not going next year, that is, if I am still around.

Two years ago, after my trip to SPIGMA I had my five-way bypass, and last year I had colon surgery just a couple of days later. This time things happened before I left.

I was coming home from doing some errands and my car decided it was tired and needed a rest I guess, as it died on me on the interstate about 15 or more miles from my house. Of course I had no telephone numbers with me that I needed, so I called Ann Calihan to look into the local telephone book for the number of a neighbor who lives down the lane from me.

He couldn’t help at the time, but he said he could get someone the next day. I couldn’t leave my car sitting beside the road as it is too dangerous.

I called Vicki Power, who is as close as a sister to me, so she picked me up and brought me home, then I called Rosemeyer Towing, which I am familiar with. Now I have my car resting comfortably on the trailer pad out back.

I will be driving the van for a while which means I won’t be going as much as I don’t like to drive it in bad weather.

After a couple of enjoyable days, when I got home the house felt unusually cold. I soon found out the reason as the furnace was out and just blowing cold air.

If all this isn’t enough, my vacuum cleaner bit the dust. If crying would do any good, I just might flood the mighty Ohio, but for now I just have to bite the bullet and deal with it.

I received a letter from Thelma Halcomb Brooks that brought a lot of memories from the past.

Thelma asked if I had remembered when Mommy would wallpaper the houses and how she would make paste from flour to wallpaper with. I sure do remember this and the wallpaper was wide, stiff paper.

Thelma mentioned how women would nail cardboard in the outhouses to keep the cold air from seeping through the cracks, and sometimes they would even wallpaper the outhouse too.

I recall Grandma Hall using catalog leaves to line her bedroom. She used round, silver tabs to insert a tack through to nail it on the walls and ceilings. I must have been part monkey as I stood on the foot of the old iron bed and nailed these catalog leaves on the ceiling for Grandma. I was six or seven years old at the time.

Doyle and Betty are still trying to deal with all this cold weather and getting out only when it is necessary. They, among hundreds of others, are ready for fresh air and sunshine.

Les and Pat Wagner, Jim Wagner along with Larry and Becky Hasty and several others, helped little Kelly celebrate her birthday. I know everyone had a great time.

My brother Jerry Hall is improving slowly. Hello to Jerry and Mattie and to their neighbors.

Bessie Shepherd, keep an open date and as quick as it is warm weather I am heading for the mountains. Oh wait a minute, that is if I have wheels. I just might have to stand at the forks of the road and hope someone is going that way.

I missed a very important birthday and I want to wish a belated happy birthday on Jan. 30 to a special guy, my little sidekick Bennie Wiederhold, who was seven years old.