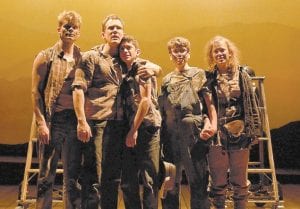 An underlying disaster drives the memorable characters in “The Burnt Part Boys,” a warmhearted, bluegrass-infused, off -Broadway musical that follows several fatherless teenagers on a dangerous coming-of-age journey.

Set in West Virginia coal country in 1962, the tuneful new musical features two brothers and their friends, most of whom lost their fathers in a coal-mine explosion 10 years earlier.

Calderon is wonderfully earnest as the daydreaming Pete, who conjures up his father as various imaginary Western heroes whenever he needs advice. Hearing that the mining company plans to reopen the isolated Burnt Part Mine, where his dad and eleven other miners lie buried, Pete determines to honor their memory by blowing up the shaft. Four ghostly, watchful, dusty miners haunt the musical, ever-present reminders of the entombed.

Noah Galvin is poignantly funny as Pete’s nerdy, musical-sawplaying best friend, Dusty, who still has his father, but reluctantly makes the trek to help out his pal.

With his best friend, fellow miner Chet (Andrew Durand), Jake races after the boys to prevent Pete from dynamiting the mine. Separately, the two parties make an arduous journey eight miles up a mountain, across a river and through several forests, which is cleverly acted out by the whole cast in about 105 minutes.

All the young people face some of their fears during the challenging hike, singing character-driven songs about who they’d like to become, and how much they miss their fathers.

With huge rolling ladders, plus a few chairs and ropes, the cast effectively simulates crossing narrow ledges and over rapids, pressing through dense forests, and gathering in the black interior of an underground coal mine. Moody lighting by Chris Lee is integral to the success of various eerie or dreamlike scenes.