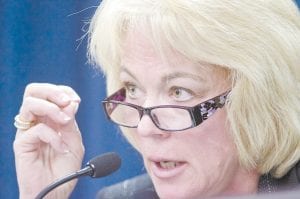 HEARING FOCUSES ON PIKEVILLE PROPOSAL — Kentucky House Rep. Leslie Combs, D-Pikeville, questioned Morehead State University President Wayne Andrews on Tuesday during a session of the House Education Committee at the Capitol in Frnkfort. Combs is sponsoring a bill that would bring the University of Pikeville into the state system. Andrews opposes the bill. Related story appears inside this issue. (AP Photo/John Flavell)

The Letcher County Board of Education approved allowing younger siblings who are not yet in school to attend the same school as their brothers and sisters when it is time to start kindergarten.

Some parents and grandparents had asked the board to reconsider a decision made at its November board meeting which requires schools to enforce attendance boundary lines already on the books, but to permit students already enrolled in schools outside their district to remain there.

Several parents were unhappy that their younger children would not be allowed to attend the same school as their other children.

Board Chairman Will Smith analyzed the number of children who are less than five years old and have siblings who are enrolled in schools outside of boundary lines.

Smith said enrollment would be tightest at Martha Jane Potter Elementary School, but that Principal Josh Yonts was okay with the idea.

“Josh says he can handle it and it will work,” said Smith. “He wants to do it.”

Letcher Schools Supt. Anna Craft said the number of children affected isn’t as large as first anticipated since it will be scattered over a five-year period.

The motion approved at Monday night’s board meeting states that siblings born after Feb. 27, 2012 must attend the school in their designated attendance boundary area.

Angel Johnson, who has two children attending Beckham Bates Elementary School, which is slated to close later this year, asked the board if her children could go to another school besides Letcher Elementary School.

“They need to go to Letcher,” said Smith.

“Why?” asked Johnson. “Up until just a few months ago every other child had a right to go to whatever school they wanted. Why can’t mine? Mine went to their home school until you closed it.”

“We passed a board order back in November,” said Smith.

“So I will just get my lawyer to contact you all and the other parents can contact my lawyer and have them contact you at the same time because that is not fair to my child,” said Johnson. “My child was going to his own school until you closed it.”

Johnson said her son should be able to attend whichever school he wants since “he didn’t tell you to close his school and make him go to another one he doesn’t like. I will just have my lawyer contact you.”

“That will be fine,” said Smith.

Letcher Elementary Principal Wendy Mullins told the board that she has given Beckham Bates Principal Rick Warf a tour of the Letcher campus and the two principals have been preparing for the consolidation of the two schools.

“We are going to look at this as the most positive opportunity for our children in meeting their individual needs academically, socially and athletically,” said Mullins.

In other business, Jarrod Stamper, the board’s student representative, asked if new Cougar paw prints could be repainted on the road leading to LCC to replace those that have faded away since the high school opened in the spring of 2006.

“I think it would be nice if we could get those back,” said Stamper.

Asst. Supt. Twyla Messer said the paw prints would be painted on the road once the construction of the technology center is finished.

“ We have several runs that need to be covered and we would greatly appreciate anyone who would want to apply,” said Messer.

• named Brett Lewis, a teacher at Letcher Elementary School, as employee of the month.

• hired Darrell Hall as board attorney beginning March 1 for a one-year period. He will be paid $100 an hour with no retainer fee.

• approved a request by the Kentucky Public Service Commission to hold a meeting in the Letcher County Central High School auditorium at 11:30 a.m. on April 5.

• approved the Fleming-Neon Elementary School’s request to take an eighth-grade trip to Pigeon Forge, Tenn. on May 4.