Board is looking to sell off portions of old high school 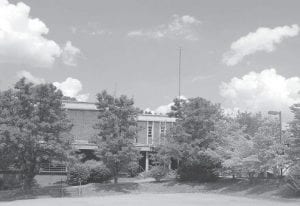 The library/cafeteria building at the old Whitesburg High School is seen in this photograph taken Tuesday afternoon. (Eagle photo)

The Letcher County Board of Education is speeding up the process of selling one of the old Whitesburg High School buildings.

The board met in special session this week to approve the transfer of a portion of the old high school property from the Letcher County School District Finance Corporation to the school board itself.

The step was taken after it was recently discovered that a portion of the WHS property is still deeded to the Finance Corporation. The issue has to be resolved before the board can sell the property.

Board Attorney Darrell Hall said the purpose of the special-called board meeting was “to clear up the chain of title.”

Hall said the tract in question, which is mostly cliff side, begins at the Whitesburg bypass and runs along a hillside behind the old science water plant was located behind the Boone Motor Company building.

Anna Craft, superintendent of the Letcher County School System, said the board first wants to sell the “annex building,” which originally consisted of the library/cafeteria but was expanded in the late 1980’s to include classrooms and offices. Two large parking lots would be sold with the building.

The Mountain Eagle this week that he is trying to get enough money together to buy the library/cafeteria and turn it into a church.

The minister, Dock Frazier, said the building would be named Faith Community Church if his organiza tion is able to buy it. He said the building represents “a large opportunity for Christian-based youth programs and youth ministries”

“We’re looking into it,” said Frazier. “It’s something we would like to do and have been pursuing and have been talking to the school board. … It’s a large economic challenge and we’re trying to see how we could do it.”

School officials also confirmed Tuesday that at least one Letcher County businessman has been looking at the old English building with the idea of turning that structure into apartments.

The old campus and buildings have often been mentioned as an ideal site for an assisted-living complex or other residential housing community.

“I would like the opportunity to see what the city might be able to do with it before it is sold,” said Whitesburg Mayor James W. Craft.

Mayor Craft said the building has stood empty for four or five years, and that he wouldn’t want to stand in the way if someone else was going to purchase it.

Anna Craft confirmed that school officials have been talking with Frazier about the property, adding that “we haven’t done anything formal.”

“We are dividing it up for the purpose of making a sale,” she said. “Our purpose is to divide the property in order that we keep the portion with the gymnasium and sell the remainder.”