Board member wants all schools to furnish Wi-Fi 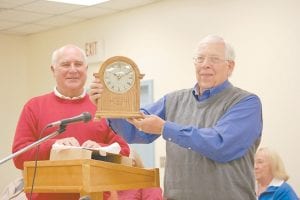 Outgoing Letcher County Board of Education Member John Spicer held up a clock he received for his service to the board as fellow board member Sam Quillen Jr. looked on.

“I don’t want to see them grouped in the hallway,” said Quillen. “How can we do this? Show me. I want to see in black and white how we can do it.”

Randy Bailey, district technology director, said it would cost about $750,000 to have wireless access in all areas of Letcher County schools. Bailey did say that he has applied for funding through an E-rate program, which provides discounted telecommunication services, and if approved the board could possibly upgrade the network for about $100,000.

“It’s a complete turnkey job,” said Bailey. “It’s a tremendously big project. You’ve got to have more equipment to handle it and you need newer equipment.” 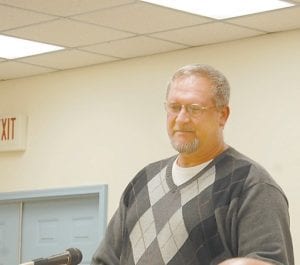 Mike Harris ended his fourth term on the Letcher County Board of Education this week, having served 16 years.

Bailey said the system has to handle many users and be a secure, reliable network.

“With the systems we have, all of the data is secure,” he said. “Ours encrypts everything. It’s a robust system that can be managed.”

Bailey said the district currently has access points in hallways but needs a device in every classroom.

“The signal just doesn’t carry through the block walls,” he said.

Board member Wi l l Smith said the district no longer receives funding for textbooks and he asked what would be the advantages to purchasing iPads compared to textbooks.

Bailey said the minimum cost of an iPad is about $400. Some schools in the district have about 30 iPads.

“We are adding them as we can and that is the plan,” said Craft.

Smith said the district needed to put every dollar it can into technology.

“We are,” said Roger Martin, district director of federal programs.

In other business, Monday night marked the last regular board meeting for board members Mike Harris and John Spicer.

“I have some mixed emotions,” said Craft. “This is the closing of a chapter. These two men have given a lot of time.”

Harris has served as a board member for 16 years. Prior to that he was president of the Parent Teacher Organization at Cowan Elementary School and then was a member of the sitebased council.

Spicer was appointed to fill the term of former board member Atwell Turner, who died in December 2008. Spicer has missed one board meeting in five years and that was because he had eye surgery.

“This is absolutely the best board I have ever worked with,” said Smith. “This has been a very knowledgeable board.”

Spicer and Harris have both said that they will stay actively involved in the school district and may serve on committees.

“I have a passion and I don’t think that passion will die,” said Harris.

Mendy Boggs and Robert Kiser will be sworn in as new board members at a specialcalled school board meeting on January 11.

Charlie Thompson, manager of the Letcher County Central High School softball field, golf green and tennis courts construction project, told the board that sod can’t be placed on the new softball field until the field dries out.

“They can’t get on the field until it dries out,” said Thompson. “They need 20 days after the field is completely dry to complete it.”

“I’ll be up there every day to check the mud,” said Craft. “You’re going to have to blow dry it or do something. They need to start drying it out one way or another.”

March 4 is the final completion date for the construction project.

Quillen bragged on the drama club at Fleming- Neon Middle School for its recent production of “Annie Jr.”

“It was marvelous,” said Quillen.

Quillen said the consolidation of Martha Jane and Fleming-Neon middle schools gave students the opportunity to put on a musical production.

Craft said it had recently been brought to her attention that there isn’t a bathroom near the cafeteria at Letcher Elementary School.

“It had overlooked me that they didn’t have their own restroom,” said Craft. “We are pleased to say that will be done.”

“ We would welcome those applications in getting new drivers,” said Craft.

Whitesburg Middle School had the highest attendance rate for the fourth month of school at 94.7 percent.

“We were watching the attendance every day last week,” said Craft. “I think we might make it through this illness. We are going to have school unless there is snow.”

• approved a contract with MTI Production for a license for an amateur production of Disney’s Beauty and the Beast to be performed by the Letcher County Central High School drama class.

• approved paying $1,915.82 to Sherman Carter Barnhart Architects for payment of claims for the construction of the softball field, tennis courts and golf range at LCCHS.

• approved the financial report, payment of bills and transfers and payment of salaries for November 2012.