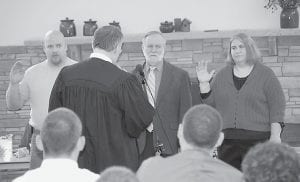 After Robert Kiser and Melinda ‘Mendy’ Boggs, two new members of the Letcher County Board of Education, were sworn in on January 11, the board sat through a six-hour long, special-called board meeting, spending about three hours listening to district administrators and principals talk about plans to improve test scores.

The Letcher County school system ranked 152 of 174 school districts in the state based on results of Kentucky’s new academic achievement testing system. Test results from the Kentucky Performance Rating for Educational Progress were released in November.

All but one of the county’s 15 elementary, middle and high schools were placed in the “Needs Improvement” category. Fleming-Neon Middle School ranked “profi cient.”

At the November board meeting, Dr. Sam Quillen Jr. expressed frustration with the test scores and wanted to know what was being done to improve academic success.

“We are trying to teach a whole lot,” said Craft. “It’s like anything else. The more you live with it, the more you will understand it. It’s a difficult process.”

Craft said the test is designed to look at process and progress.

Linda Hall, director of curriculum and instruction, said each school has a comprehensive school improvement plan which principals review every 15 to 20 days.

“It forces us to continually look at data,” said Hall.

Hall said three areas of improvement on which the district is concentrating are culture, quality of instruction and data driven culture and instruction.

District directors have been assigned a “contact” school where they spend four days a week.

Hall said the new testing system comes with a new set of standards.

“It has to start in kindergarten and that is a mindset change for all of us,” said Hall.

Each school has an annual measurable objective and if a school meets it, then the school is considered to be a progressing school. Based of the categories of novice, apprentice, proficient and distinguished, the goal is to be proficient.

“We have a ways to go to get our schools proficient,” said Board Chairman Will Smith.

Fleming-Neon Middle School was the only school in the district to rank profi- cient and Craft credits the focus on middle schools in recent years.

Improvement Technology System (CIITS) program, said schools had to be in the 70th percentile to be deemed proficient.

Graduation rate and career and college readiness weigh into high school scores. The graduation rate, which accounts for 20 percent of a school’s accountability level, for Letcher County Central High School in 2011 is 74.2 percent. The state average is 77.8 percent. Kenny Cornett, district director of pupil personnel, said he estimates the graduation rate to be about 82 percent in 2012.

“In three years, Gary became our friend,” said Craft. He earned our respect and we miss him greatly.”

Craft said Roger Martin, district director of federal programs, and other members of the finance office have been working overtime since Caldwell’s death.