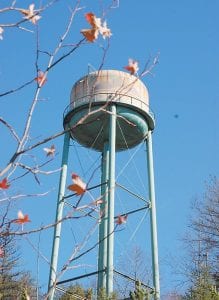 LANDMARK COMING DOWN AFTER 54 YEARS — This water tower formerly used by the Whitesburg Appalachian Regional Hospital will be torn down in the near future. The tower, which sits atop Tunnel Hill, was built in 1956, the same year the hospital opened, and was used until about 10 years ago. It has since become a safety hazard. (Photo by Sally Barto)

The Letcher County Water and Sewer District’s governing board has voted to deny a contractor’s request to delay the start of construction of the Premium/Highway 160 Water Improvement Project until spring because of the chance of bad weather.

The water and sewer district’s board of directors voted four to one to deny the request by Stotts Construction of Columbia, Ky., during the board’s November meeting. Stotts made the request based on the large number of construction days the company missed last while working on a project to bring water into Letcher County from Carr Creek Lake in neighboring Knott County.

Board member Billy Stamper cast the only vote in favor of Stotts’ request, saying he would like to look at other options, including asking Stotts to lower its cost per foot to install water lines if the request was granted. However, a representative of the engineering firm in charge of the project said Stotts was already the low bidder on the Premium project and would be unlikely to drop costs further. Bell Engineering’s Lee Lowe said Stotts’ reasoning for the request had to do with the long travel distance from Columbia, in south central Kentucky, to Letcher County when work had to be suspended in the middle of the week.

“My recommendation is to tell Stotts to start Premium as soon as they finish on Highway 1410,” said Water and Sewer Board Chairman Phillip “Pee Wee” Back. “The equipment is here and they can start the job.”

In other business, the board heard a report from Joe Burns of Kentucky Rural Water concerning the possibility of getting water from the City of Cumberland for residents of the Cumberland River area in Letcher County. The board has been frustrated in its efforts to obtain a supply of treated water for residents on the Cumberland side of Pine Mountain for some time. The district has been unable to get a commitment from either Cumberland or the Wise County (Va.) Water District in Virginia, although both districts agreed to furnish water previously. The holdup with Cumberland came because of problems with the line running to the Letcher-Harlan county line, but Harlan County Judge/ Executive Joe Greishop told Letcher County Judge/Executive Jim Ward last year that a new line would be built.

Burns, who has worked to set up a consolidated water district between the cities of Cumberland, Benham, and Lynch, said the consolidation should make the process of supplying water to Cumberland River easier to accomplish. Burns said all three cities have approved the consolidation and a new board for the unified water district should be in place by early in 2011. Burns suggested that board members from the Letcher District attend meetings of the new board in Harlan County and attempt to move the process along. Water Superintendent Tim Reed told Burns it would take approximately 125,000 gallons per day to supply the 125 customers on Cumberland River. Burns predicted a contract could be signed in March.

Kim Padgett of the United States Department of Agriculture’s Rural Development Agency asked Burns if the new water company will be regulated by the Kentucky Public Service Commission. Burns said it would not. Padgett told the board the rates the Letcher County District can pay for the water would still have to be approved by the PSC.

Jamie Noe of Bell Engineering gave a progress report on water projects and told the board that an easement to bore under CSX rail lines has been negotiated for a fee of $13,900. The board voted unanimously to pay CSX the agreed fee and Noe said once the work associated with the line crossing is finished, the Knott-Letcher water connection, known as the Knott County Interconnect, will be complete.

The Interconnect is seen as the vital component in the Letcher Water and Sewer District’s plans because it will guarantee a supply from Carr Creek to supply all the needs of the Letcher County system. Back said that a 627,000 tank will insure that a steady water supply is available. He said if the Cumberland River situation can be resolved, the county would have no supply problems.

• The board also heard a request from residents of Stinking Creek to extend sewer lines to houses along the creek, but Back said the board couldn’t make any commitment on sewer projects until funding was assured. Board Attorney Jamie Hatton told the board it would save a lot of money if it could lay sewer lines at the same time water lines are laid. Back asked Hatton to initiate a study of funding possibilities for sewer installation in the county.