Board won’t fund teacher for program 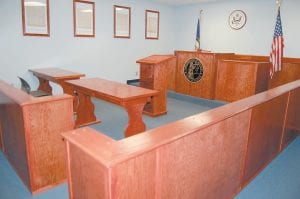 NEW ROOM, NO TEACHER — This mock courtroom was built at the Letcher County Area Technology Center as part of a new law enforcement and criminal justice program that was to be operated in conjunction with the Letcher County School System. The Letcher County Board of Education declined this week to pay the nearly $16,000 still needed to hire a teacher for the program.

In December, the board formed a partnership with the technology center to create the program and established a criminal law teaching position under the umbrella of the vocational school.

The board approved budgeting $28,000 during the Dec. 17 meeting to purchase materials and supplies needed to divide vacant space at the technology center to create classroom areas, a courtroom and a virtual shooting range needed for the new program. Drafting students created a design for the space and architects with Sherman-Carter-Barnhart, who designed the new tech center building, looked over the plans at no cost to the board.

The district was awarded $40,000 during the end of 2012 from the mineral holding company Kentucky River Properties LLC to help fund the new program. The total cost needed to fund the criminal law teaching position is $55,885, with $40,433 for the salary and $15,452 in fringe benefits. The Office of Career and Technical Education (OCTE) has offered to provide $23,946, a sum of money that came available after a teacher’s aide position was vacated.

Another portion totaling $15,945 was provided by a grant from Kentucky River Properties LLC, leaving $15,993.91 needed to fully fund the position.

“It should never get to this position where the local board has to fund state positions,” said board member Will Smith.

Asst. Supt. Twyla Messer, who was in Louisville for a training session, told the board via Skype that 2,559 criminal justice-related positions now exist within a 40- mile radius of Letcher County, and that more positions are expected to be created with the opening of federal prison planned for Letcher County.

Messer said the Letcher County Planning Commission anticipates the new federal prison, to be constructed at Roxana or near Payne Gap, will be completed in 2017.

“The impact on employment opportunities for our community could range from 300 to 450 federal jobs,” said Messer.

More than 300 Letcher County Central High School students expressed interest in the law and justice program in a recent survey. Classes offered were to be introduction to law and justice and basic telecommunications. Upon successful completion of the courses, students would earn Candidate Physical Ability Test (CPAT) certification, first responder state certification, and dual credits with the University of Pikeville and Eastern Kentucky University.

Board Chairman Robert Kiser questioned what jobs students could hold immediately after graduating high school. He also voiced concerns about the certifications students would receive and who would be hired for the teaching position.

Messer told the board that $23,748.73 has been spent on the construction of rooms for the law and justice program. Part of the grant from Kentucky River Properties LLC totaling $15,945.09 has been spent on teaching supplies, including a laser shot simulator.

After stating that he might be stepping on some toes, Tony Sergent, who begins his term as superintendent on July 1, said the district went about the process the wrong way.

“We’re in front of the board asking you to fund this position right now, right?” asked Sergent. “We’ve already built the rooms, already bought the laser equipment. We did it backwards, didn’t we? Shouldn’t we have come and got board approval to fund the teacher and then did all of that.”

Supt. Anna Craft told the board that at the time the district was in position to believe the job was going to be funded.

“You couldn’t have built it if you were waiting for the July revenue,” said Craft.

Craft said funding for the position could still be obtained if the district is awarded a $45,000 grant from the Steele-Reese Foundation, a charitable trust that helps rural communities in Appalachian Kentucky. The district won’t learn until mid-July if it will receive money from the foundation.

Craft told the board the district didn’t lose anything by renovating the classroom space.

“That space will definitely be used,” she said. “Your truancy court would still meet in that courtroom.”

Board Member Mendy Boggs asked the finance officer if money was in the general fund to cover the amount needed.

Board Member Sam Quillen Jr., a Neon dentist, supports the law and justice program and says it is an opportunity to keep students motivated and in school.

“I think you can invest $15,000 in your students for a year,” Craft agreed. “If that works out it will prove you made a good investment. It is just something you have to roll the dice and hope you made the right decision.”

After spending more than an hour Monday night discussing whether to fund a portion of the position, two motions were made pertaining to the issue. Board Member Terry Cornett made a motion to table the issue for two weeks in order to have questions answered. Boggs seconded the motion.

Smith told Cornett that a decision needed to be made Monday night so administrators at LCCHS could complete a master scheduling plan for the coming school year.

Cornett and Boggs voted in favor of Cornett’s motion, while Smith, Quillen and Kiser voted no.

After more discussion among board members, Smith made a motion, seconded by Quillen, to help fund the position for one year to see if the pilot program could succeed.

Smith and Quillen voted in favor of providing funding for the salary, but Boggs, Cornett and Kiser voted against it, killing the program.