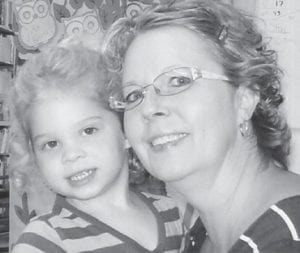 Three-year-old Taylor Grace Howard and her grandmother, Margaret Stidham of Linefork, recently participated in the Grandparents’ Luncheon at Mountain Heritage Headstart in Blackey. Taylor is the daughter of Nikki and Scott Howard of Letcher County, and has an older sister, Tori Mackensie Howard, 4.

By the time this week’s Eagle comes out fall will officially be here, and the cooler nights have already started.

Bob, Don and Coreen Pridemore and myself took advantage of the nice weather we’ve been having and spent a few nights at Carter Caves State Park.

Lyndsi and Sadie Gilliam came over from Morehead and spent the day with us and Cindy and Jessie Banks. Scott came up from Lexington and spent a couple of nights at the lodge.

We rented a three-bedroom cabin and Jerry and Bonita Adams came and spent the night too. We enjoyed being together playing cornhole, hiking, and of course, eating.

We really enjoyed having Sadie us for a couple of days. She’s very entertaining to only be 2½ years old. We walked to the playground a few times and the large, fenced-in yard at our cabin made it nice, with a fire pit and large back patio table.

A large crowd attended the John and Larenna Adams’s family reunion, maybe one of the largest groups yet.

Sorry to learn that Rod and Jodi Mcauley Back’s home had recently caught fire and burned. It would have to be a devastating thing to lose your home.

I forgot to mention that during our state park trip Bonita Adams celebrated a birthday, and Bob and I had an anniversary. Lyndsi brought cake and coconut pie for us that evening.

Roland and Ruth Ann Brown and other family and friends spent a week together at Top Sail Island. I hope all had a great time.

Deepest sympathies to the family of Hargis Ison, who died over the weekend. He had been at the hospice hospital for the last week or so. I’m sorry to say I didn’t realize he was that bad until after I left the hospital. He was a kind, loving fellow, and a special friend to many, and his large family has lost such a wonderful father, grandfather, brother, uncle and cousin, who touched their lives with his loving ways.

I’m running slow today, so that’s it for this week.