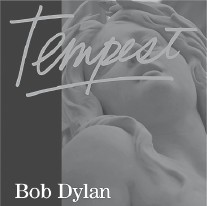 “Tempest” is no doubt the best album you’ll ever hear from a 71-year-old.

If that sounds like damning Bob Dylan with faint praise, rest assured this is one of the best discs you’ll hear by anyone this year, at any age. Rather, the point is made to marvel at the vitality of a man who’s been making albums for 50 years and still manages to be relevant.

Bob Dylan has led his fans, and the entire music community, on many journeys over a half century, even a few dead ends. After a detour with 2009’s largely unsatisfying “Together Through Life,” the new “Tempest” continues the improbable late-career renaissance of America’s greatest living songwriter.

The title cut is the centerpiece, a Celtic-flavored telling of the Titanic story, both historically accurate and fanciful. Its 45 verses — no chorus, no bridge — even reference Leonardo DiCaprio. The cinematic look at all manners of behavior in the face of impending doom stretches on for 14 minutes. A watchman who missed the trouble ahead is an indelible, recurring character.

“Tempest” is not even the first epic on the record. “Tin Angel” is an old-fashioned murder ballad, a bloody tale of a tragic love triangle that advances on a rubbery and ominous bass line by Tony Garnier, Dylan’s bass player for more than 20 years and 2,000 concerts.

That bass line is an example of the musical signature of the disc — arrangements that create momentum through repetition. On “Long and Wasted Years,” it’s a descending guitar lick. The hook on “Narrow Way” rocks hard. The pedestrian blues of “Early Roman Kings” shows that approach doesn’t work every time but otherwise, the effect is mesmerizing and directs attention straight to the lyrics. Dylan’s voice is a guttural growl now, that’s no secret, but he knows how to enunciate and sing. None of the words pass by unnoticed.

There’s plenty to be engrossed by. Serious study would take a New Yorker-length article, when one song alone has more verses than most modern albums. Dylan shows quite a violent streak, with one song’s key line being “I pay in blood, but not my own.” The lovely tribute to John Lennon begins with his murder.

Yet the parsing of lyrical clues to discern What Dylan is Thinking is a fool’s errand. Better just to enjoy the story-telling and hidden delights. A phrase like “you’re like a time bomb in my heart” sneaks up and detonates. Dylan’s humor is sly and often overlooked, like on this couplet: “Last night I heard you talking in your sleep, saying things you shouldn’t say. Oh, baby, you just might have to go to jail someday.”

Dylan is an American musicologist, and the variety of styles on “Tempest” adds to the enjoyment. The opening “Duquesne Whistle” swings. “Soon After Midnight” is a love song led by pedal steel guitar. “Pay in Blood” mixes the pedal steel with a soulful backbeat and “Roll on John” has a stately, weary gait that matches the subject matter.

Decades ago, Dylan’s characters, allusions and turns of phrases were the subject of academic study. That this inscrutable lyricist can continue to amaze, amuse, befuddle and bedazzle past retirement age is something to behold.

CHECK THIS TRACK OUT: “Long and Wasted Years” is a marvelously-written tale of a love lost to time, with the neat writer’s trick of ending on a title phrase that’s not heard elsewhere in the song.