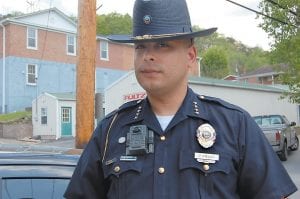 The camera, attached to the officer’s uniform shoulder, will provide documentation of police and suspect encounters.

“It covers everything,” said Whitesburg Police Chief Tyrone Fields. “It’ll get the whole picture. It adapts to your surrounding. ”

The video footage provides a clear picture and sound “just like you are watching a movie on a flat screen T.V.”, said Fields.

The City of Whitesburg recently purchased two police body cameras, which cost $900 each, with funds collected through the City’s alcohol tax. Whitesburg Mayor James W. Craft said the cameras will be used for several weeks and then it will be determined if more cameras will be purchased.

“For the time being, we want to see how they work and how valuable they are,” said Craft.

The footage will be uploaded to a computer at the end of each officer’s shift.

“If a person knows they are being recorded and this evidence is going to be used in court, I think they will act differently,” said Fields.

The body cameras, Fields said, will help protect the morale of police officers.

“It’s just another level of protection for the policemen and the public,” said Craft.