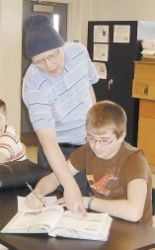 In this undated 2008 photo, Bill Sparkman is seen with 7th grade student, Jessie Roberts during a lesson about sound waves. (AP Photo/The Times-Tribune)

Authorities have released the body of a parttime census worker found in a remote Appalachian forest nearly a month ago with a rope around his neck and “fed” scrawled across his chest, but they still will not say if someone killed him.

Josh Sparkman told The Associated Press on Tuesday that investigators released his father’s body Monday to the Cremation Society of Kentucky.

Bill Sparkman, a substitute teacher, had wanted his body either donated to science or cremated. Authorities advised Josh Sparkman to choose the latter option and not have the family view the body because of its condition.

A family visiting a Clay County cemetery found Bill Sparkman on Sept. 12 with a rope around his neck and his hands and feet ducttaped. The coroner confirmed the word “fed” was written on his chest, apparently in felt-tip pen.

The state medical examiner’s office has established the cause of death as asphyxiation but has not determined whether it was a homicide, accident or suicide.

There were “circumstances” that made the Sparkman case particularly difficult to resolve, but Wilder declined to elaborate.

“The cause of death was pretty well determined. The manner of death is still what is under investigation,” Wilder said.

Josh Sparkman said police had released his father’s pickup truck, which was found at the scene, and he is now driving it. Although he says police have told him nothing, he remains certain the death was a homicide.

He said many things, in- cluding a census laptop and personal items like his grandfather’s wedding ring, were missing from the truck and were not on a list of potential evidence that investigators kept. State police Capt. Lisa Rudzinski confirmed the laptop was not found in the truck but declined to comment on the other items.

“They ransacked that truck,” Josh Sparkman said. “That’s more evidence this is not an accident or suicide. This is a homicide.”

Sparkman said he was working on organizing a memorial service for his father but hadn’t scheduled it because he is broke and hasn’t found a funeral home to host it. He said he would like to do it soon.