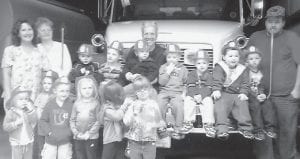 Students from Cowan Head Start visited the Kingscreek Fire Department and had a wonderful time. Each child received a fireman’s hat.

The Boggs reunion was held at the Kingscreek Park with a great crowd attending. Prizes were given to the oldest and youngest present. Mae Boggs, the oldest one there, had received the prize for the last two years at age 88 and 89. She suggested the prize go to the oldest child of Harrison and Ora Boggs, and that was Lt. Colonel Bernard Boggs.

Prizes were also given for winners of the games. Everyone had a good time. Next year’s reunion will be at the same place on the second Saturday in October.

Mae Boggs attended the wedding of Kendra Boggs and Cody Barnes at the Greenside Baptist Church in Lexington, Oct. 15. They are both graduates of Eastern Kentucky University. Kendra is the daughter of Tim and Melinda Mullins Boggs. Cody is from Louisville. A large crowd attended. The reception was nice and lasted until 11 p.m. Everyone danced, even the two-year-old babies. The bride and groom both danced a lot. She didn’t miss one dance.

Mae got to meet Cody’s family for the first time. They all seemed really nice and friendly. Mae hopes to see more of them.

The newlyweds were to leave last Sunday morning for their honeymoon in the Bahamas. Congratulations to Kendra and Cody from all the Boggs family. Wishing you well. Cowan

Randy and Eula Brown traveled to Nicholasville for their grandson Cody Garrett’s football game at Jessamine High School. The senior football players were being honored for their contribution to the program. Cody is quarterback for his team.

Another grandson, Cory Garrett, who attends East Jessamine Middle School, was honored as an eighth grader for his team two weeks ago, where he also plays quarterback. Cody won the MVP award at his football banquet.

Dustin Crawford’s wife Jenna and her mother have been on a Mediterranean cruise and visited Rome, Sicily, Athens, Mylanas, Greece.

Linda Comb says hello to Lois Brown Sturgill of Fairborn, Ohio, and Dana Ison Walker of Naples, Fla. Remember them both and Dana’s daughter Kim in your prayers.