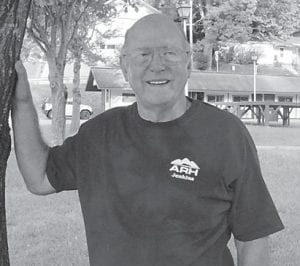 Wendell ‘Butch’ Boggs will be honored by the Jenkins Homecoming Days Festival Committee for his many years of service to the Jenkins community during the annual homecoming festival scheduled for August 23-25.

Boggs was born in Jenkins on November 1, 1940 to A.W. and Beulah Boggs, both natives of Wise County, Va. His parents migrated to Jenkins during the 1920s when his father became employed as an accountant by Consolidation Coal Company.

Boggs attended all 12 grades at the old Jenkins School and was graduated in 1958.

“I was a good student but not an honor student” he says. “I belonged to the Beta Club which required members to maintain a strong B average and I belonged to the Key Club sponsored by the Jenkins Kiwanis Club. The motto of Kiwanis Club is ‘We Build’ meaning that the club builds the character of the members and helps to build better communities through their endeavors. As Key Club members we participated in most projects in which the adult Kiwanians were involved. Some of the most memorable projects were the upkeep of the old Kiwanis swimming pool on Goodwater Street and the Kiwanis Minstrel.”

Boggs’s fondest memories of growing up in Jenkins are playing baseball at the field, which was located just across the street from his home on Lakeside Drive. He joined the high school team and won a letter as an eighth-grader and continued playing for another four years. He also played the trumpet in the band. After high school he attended Clinch Valley Junior College at Wise, Va. He then attended Morehead State College where he earned a bachelor’s degree in biology and philosophy.

Upon graduation he received a call from a high school in Greenup recruiting him to teach science and math. “But I don’t have a teacher’s certificate”, explained Boggs. “That’s okay,” said the superintendent, “we will hire you on an emergency basis and we will teach you to teach.”

After working two years as a classroom teacher, Boggs decided to further his education. He sent out applications to several schools of pharmacy and received a call from the University of Mississippi at Oxford which liked his credentials and experience and admitted him right away.

He was graduated in 1968 and returned to Jenkins to work at Clark Pharmacy, which was located on Main Street in Jenkins. He worked for Mr. Clark for four years then decided to purchase the pharmacy in 1972. He stayed at the same address for nearly 40 years then recently decided to retire and sell the pharmacy to another young Jenkins native, David Powers. Boggs still works occasionally as a substitute pharmacist.

Boggs says he was a better student in college than in high school because he spent more time in the library where his girlfriend, Donna, worked. They were married in 1969 and have a son, David. They also have three grandsons, Dakota, 16; Ian, 12, and Noah, 10.

Boggs says he has always been proud that he decided to come back to Jenkins to build his career and make his permanent home.

“ This community has been good to me,” he says, “and I have been good to the community. My patients were more than just customers; they were also my friends. I felt that my vocation was more than a job; it was a personal obligation to help my patients anytime I could. I have gone back to the pharmacy many nights after hours to fill a prescription for a sick patient and I was glad to do it. I wouldn’t want to live any other place.”

In addition to his work as a pharmacist, Boggs has served on the Jenkins City Council and the Board of Education of the Jenkins Independent School District. He has been a Kiwanian since about 1975 and served as president of the Kiwanis Club of Jenkins and as lieutenant governor of Division 8 as a representative to the Kentucky-Tennessee District. He has been a member of the Jenkins United Methodist Church for about 60 years and currently serves as chairman of the board of trustees and has sung in the choir. He has also served as lay leader.

You could always count on Boggs to take time to exchange pleasantries anytime you met him whether in the pharmacy or in public. He greeted everyone with a smile and loved to share amusing quips and interesting stories.

One of his favorite stories involved a local gentleman who had the tendency to drink a little too much booze on the weekends. Every Monday morning his loving wife had to go through a ritual of trying to get him to go to work and him begging to stay in bed because he was ‘sick’.

On one occasion she became irate and told him, “You ain’t sick; you’re drunk and you brought it on yourself. Now get out of bed and go to work!” He said, “Honey, maybe if you pray for me I will feel better.”

So his wife got down on her knees beside his bed and began praying, “Oh Lord, please help my poor old drunk husband to get well so he can go to work.” The husband sat up in bed and said, “Honey, don’t tell him I’m drunk; tell him I’m sick.”