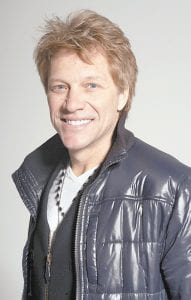 Bon Jovi will appear in Louisville at the KFC Yum! Center in March.

Jon Bon Jovi has been with his band for more than 30 years, so he could be considered something of an expert when it comes to the durability of rock stars. Still, even Bon Jovi is mystified at how the senior set is dominating on the stage.

“I can’t get over it,” said Bon Jovi, who will perform next week with Paul McCartney, The Who, Bruce Springsteen and a host of other superstars at the 12-12-12 concert at Madison Square Garden to benefit victims of Superstorm Sandy.

But at 50, he’s not ready for early retirement either. Bon Jovi has a couple of songs in the upcoming Al Pacino film, “Stand Up Guys,” and the band just completed their 12th studio album, “What About Now,” set for release early next year. They also have a world tour kicking off in Connecticut on Feb. 9.

Bon Jovi was in a jovial mood when he sat down with The Associated Press last week to discuss his group’s upcoming projects, but turned somber when he discussed some of the more painful events to hit him in 2012: The devastation caused in his home state of New Jersey by Superstorm Sandy and the recent troubles of his 19-year-old daughter, Stephanie Bongiovi, found unresponsive in her dorm room at an upstate New York college last month after an apparent heroin overdose. Still, he discussed it all with candor — and optimism.

AP: What was the intent of releasing the single, album and tour in stages?

Bon Jovi: I know how to do it. It’s as simple as that. … New songs are why artists go on the road. That’s why I go on the road. It’s a three-prong play. Writing: You’re intrigued. Recording: It brings it to life. And then you want to share it.

AP: Tell me about being part of the Jersey rocker pedigree.

Bon Jovi: Depends what day of the week that it is. Those are my roots. That truth helped us not fall into the trap of our peer group in the mid-’80s. Being from New Jersey was actually a great asset, now that I’m a much older, wiser man. … If you were to ask me about a mistake I have made, it’s calling my fourth album, ‘New Jersey,’ because for the first time in my life, we were compared to the E Street Band. I don’t think we’re anything like the E Street Band. There’s a Jersey root there. I love the band. I grew up loving them. But I didn’t want to sit up there telling (imitating Springsteen), ‘Jonny when I was 16 …’ Uh uh. There was a lot of guys jumping on that bandwagon. I didn’t do that.

AP: Do you see similarities between you and Bruce Springsteen as philanthropists?

Bon Jovi: My philanthropy is no relation to anybody else’s. None. My philanthropy and what we do at the foundation speaks for itself and has no relation to anyone’s. I don’t know what he does as a humanitarian. I have no clue. … I’m talking about what I do at the Soul Kitchen (his community restaurant in New Jersey). It’s a whole other level. It’s millions of dollars in a foundation that does stuff.

AP: You seem to honestly care about people and not just the photo opp. You left London early to see the aftermath of Sandy. Why do you care so much?

Bon Jovi: That’s a deep question without a simple answer. I throw gasoline and light the match on that photo opp guy. This was the argument in politics this year. Entitlements. I call them empowerments. If a guy doesn’t have to worry so much on how he’s going to have to get fed tonight, maybe he can concentrate on reading the book or going to get a job. Maybe his kids are going to be happier.

AP: With your daughter recently in the news, how do you go forward from there?

Bon Jovi: I didn’t have any sisters. We bring home this girl the first day. Now what? Where’s the manual? There was no manual. So you bring her up the best you can, you surround her with hugs and kisses and know that she may eventually fall down. I appreciate the outpouring of kindness in light of what happened in my household. I’m shocked as much as the next parent with this situation and had no idea. But then you surround them with best help and love and move on, and that’s where we’re at with it. Steph is a great kid. Great GPA. Cool school, Hamilton College up in Clinton, N.Y. Everything about it is idyllic. She was doing great. Then a sudden and steep decline. Hopefully, we caught it when we did and that’s the end of it. But who knew? I’ve got three more to come.

Bon Jovi: I hope so. I’m confident, but no one knows the future. It is what it is.