Bond revoked for suspect held in beating at Jenkins 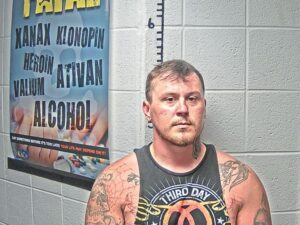 Jared Ratliff is being held without bond after being arrested on assault charges in Jenkins.

A man who was shot by police after a car chase in January is in jail again, this time on a second-degree assault charge after a fight at a Jenkins gas station in which another man was seriously injured.

According to court records, the incident occurred about 2:25 a.m. on September 13 at Jenkins Double Kwik on Main Street in Jenkins. A warrant filed in the case by Jenkins Police Officer Devin Slone says Jared Ratliff “intentionally caused serious physical injury” to Phillip Tackett by hitting him and kicking him numerous times in the parking lot of the gas station.

A cell phone video circulating online allegedly of the incident shows a stocky man identified by officials as Ratliff picking up Tackett, who appears to be limp and motionless, and then slamming him onto the concrete. It then shows the man identified as Ratliff striking Tackett several times in the face with his fist as he lies motionless on the concrete, and then kicking him in the ribs. The assailant screams obscenities at Tackett while the assault takes place.

Slone says in the warrant that he has a copy of the video, which came from “an unknown source.”

According to the warrant, the attack caused a laceration to Tackett’s head that required seven staples to close, as well as other injuries to his face and ribs. Tackett was transported by ambulance to the emergency room at Whitesburg Appalachian Regional Hospital. Police say he was released the next day.

Ratliff is still in jail on a bond violation. Ratliff was arrested in January after a vehicle he was driving allegedly struck two Whitesburg Police Department cruisers that had blocked the road near the Whitesburg McDonald’s. Officers used their vehicles to block the road after Kentucky State Police troopers chased the sport utility vehicle (SUV) into Letcher County from near the city of Harlan.

Police fired on the SUV after it struck their cars. The SUV wrecked at Bottom Fork and Ratliff was arrested.