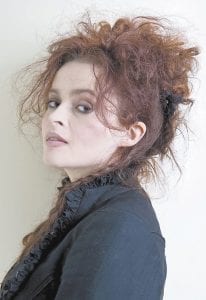 Once a corset queen in prim, proper costume dramas, Helena Bonham Carter has spent her time lately playing all manner of foul women.

Fanatic Bellatrix Lestrange, a disciple of evil Lord Voldemort in the “Harry Potter” movies. Vile Mrs. Lovett, who grinds murder victims up as meat for pies in “Sweeney Todd: TheDemon Barber of Fleet Street.” A crazy old witch with an eyepatch and hair as brittle as straw in “Big Fish.”

Now Bonham Carter’s playing the bratty Red Queen in “Alice in Wonderland,” digital wizardry giving her a monstrously bulbous head atop a tiny body as she repeatedly shouts with glee, “Off with their heads!”

“I am playing lots of villains. It’s horrible. Serial killer, sadist. But I think it’s the age, you know. That’s what you get over 40, maybe,” Bonham Carter, 43, said in an interview. Shifting into a shrill hag’s voice, she adds: “Ooh, she’s aging. She must be evil. She looks like a witch.”

The British actress has romantic partner Tim Burton to thank for many of her wicked characters, along with other persona-shifting roles that include a chimpanzee in “Planet of the Apes” and the voice of an amorous cadaver in “Corpse Bride.”

Burton says he and Bonham Carter “have completely different tastes in movies” — she still has not seen his debut feature, “Pee-wee’s Big Adventure,” figuring maybe she’ll sit down and watch it one day with the oldest of their two children.

Yet while Bonham Carter was best known in the 1980s and ‘90s for fancy period dramas such as “A Room With a View,” ‘’Lady Jane,” ‘’Howards End” and “The Wings of the Dove,” she said today’s golden era of fantasy films suits her perfectly.

“That is so much my cup of tea. So the fact that I’ve coincided with ‘Harry Potter,’ which is all about witches and wizards, absolutely up my alley. I just want to wave a wand,” Bonham Carter said.

“As with ‘Wonderland.’ I could not believe my luck when Tim asked me. I thought it was going to be enough just to be alongside, and I could spectate. I love that whole culture of Alice and Lewis Carroll. I’ve always been keen on it. Then to be part of it and to pretend, to be invited and paid to pretend and invent your own Wonderland. … It’s my dream come true.”

Bonham Carter’s father was a banker and mother a psychotherapist, but cinema runs in the family. Her great-uncle was director Anthony Asquith, whose films include “Pygmalion” and “The Importance of Being Earnest.”

She went into acting because she was always fantasizing about leaving behind her own identity.

“I was very introverted as a child. I had a friend who was an actress when I was about 5, and she was immensely glamorous, so I just wanted to be her,” Bonham Carter said. “I spent most of my childhood wanting to be somebody else, so why not get paid to be somebody else? So that’s kind of how it happened.”

“The Wings of the Dove” brought Bonham Carter a best-actress nomination for the 1997 Academy Awards. She has done other period roles since, among them Anne Boleyn in the TV miniseries “Henry VIII” and Queen Elizabeth II’s mother in the upcoming film “The King’s Speech.”

Yet Bonham Carter has greatly expanded her repertoire in the last decade. She co-starred in Brad Pitt and Edward Norton’s “Fight Club,” lent her voice to “Wallace & Gromit in the Curse of the Were-Rabbit,” had a role in last year’s “Terminator Salvation” and appeared in such independent films as “The Heart of Me” and Steve Martin’s “Novocaine.”

Some of her wildest roles have come from Burton, who has cast her in his last six movies, including “Sweeney Todd,” ‘’Big Fish” and “Charlie and the Chocolate Factory.”

“He’s given me a huge lease on life career-wise, quite apart from romantically and personally, because we have two amazing children,” Bonham Carter said. “I’m just so lucky to feature in his imagination. I feel even luckier now that I carry on featuring in his imagination, because he knows me better now, but I still pop up.”

It could seem like nepotism, Burton handing choice roles to the mother of his children. But Bonham Carter has had to campaign for some parts — convincing Burton she was right for the title voice in “Corpse Bride” rather than the ingenue role he initially off ered her and enduring a long audition process for “Sweeney Todd.”

“We’ve done pretty well together, living together, working together,” Burton said. “It’s not easy, but look, the great thing is that she’s done so much stuff … before we even met, so we’re both pretty secure in our own worlds.”

The first time they ever spoke, Burton told Bonham Carter he had a hunch that she was an actress who liked covering herself up. When it came to casting “Planet of the Apes,” he said she was the first person he thought of to play a chimpanzee, she recalled.

“I just found that really touching. I guess a lot of other people would be insulted. But I’m lucky that I was recognized by him as one of those people to cover themselves up, and he intuited completely rightly,” Bonham Carter said.

“When else was I going to be asked to be a chimpanzee? … The whole point to me of acting is getting out of my skin and into somebody else’s, so the further away — like, not even a human being but to change species — that to me is like heaven.”