By BRUCE DeSILVA The Associated Press 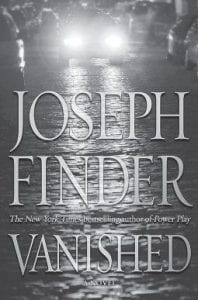 Gabe is a lonely boy. Secretive with his mother, he spends much of his time in his room, working away at a graphic novel that he refuses to show to anyone. But he’s always looked up to his Uncle Nick, Special Forces hero turned corporate security investigator. And now, as Joseph Finder’s latest thriller, “Vanished,” opens, Gabe desperately needs his uncle’s help.

Gabe’s parents have been ambushed outside a Washington restaurant, his mother clubbed in the head and his stepfather apparently kidnapped. So Nick, of course, drops everything and rushes to the rescue.

“Vanished” is something of a departure for Finder.

His first eight novels have all been stand-alone political and corporate thrillers, and he’s found considerable commercial success with them. His last four have been New York Times best-sellers, and Gaumont has announced a movie deal for Finder’s 2004 novel, “Paranoia.”

With “Vanished,” however, Finder introduces his first series character, promising we will see a lot more of Nick Heller in the future.

Still, admirers of his earlier books will find that “Vanished” has the familiar trappings of a Finder novel, including wellcrafted characters, lots of unpredictable plot twists and a furious pace.

It’s because of Gabe and his mother, Lauren, that Nick jumps into the case. It certainly isn’t for his brother, Roger. The brothers never did like each other much. As Nick puts it, “White guys who call each other ‘dude’ are annoying. … I wouldn’t call Roger annoying. He’s a jerk.”

Besides, they’ve hardly spoken since their father, Victor Heller, was packed off to a federal prison for securities fraud. The brothers don’t see eye-to-eye about their father’s guilt.

But why would anyone kidnap Roger, a moderately successful middle manager in a large corporation?

If it’s really a kidnapping, why hasn’t anyone called with a ransom demand?

Why are thugs who work for Paladin, a Blackwater-like private military company, suddenly so interested in Roger’s family?

Why do Roger’s phone records show a recent flurry of calls to the federal prison? Could their father be mixed up in this somehow?

And why is Lauren keeping secrets from Nick?

It takes all of Nick’s skill as an investigator, and more than a little muscle, to uncover the shocking answers, and he ties the case up with a slam-bang ending.