Booker, Cats too much for Vols 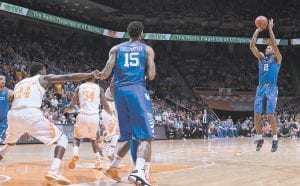 Kentucky’s Aaron Harrison (2) shoots against Tennessee in the first half of Tuesday night’s game in Knoxville. (AP Photo)

Devin Booker had 18 points and seven rebounds as No. 1 Kentucky picked up its defense in the second half and extended the best start in school history Tuesday night with a 66-48 victory over Tennessee.

Tennessee coach Donnie Tyndall called Kentucky “arguably the best team to ever be assembled” this week and said if his team played as poorly as it did in the first half of a 73-55 loss to LSU on Saturday, it would lose by 100 points. 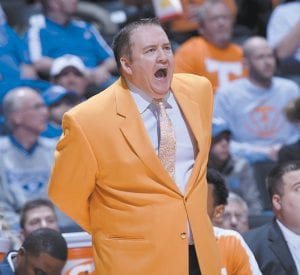 Tennessee head coach Donnie Tyndall, formerly the headman at Morehead State University, yells during the first half of his team’s loss to No. 1 Kentucky Tuesday night in Knoxville. (AP photo)

The Vols instead led late in the first half and trailed by just four with 9 minutes left before Kentucky pulled away.

Kentucky wasn’t capitalizing on its prohibitive size advantage early on. In the first half, Tennes- see outrebounded the Wildcats 15-13 and outscored them 20-8 in the paint.

Tennessee made seven consecutive shots during one stretch against a Kentucky team that ranks second nationally in scoring defense and blocks. When that streak ended, Tariq Owens delivered a putback that resulted in a three-point play, putting Tennessee ahead 26-23 with 4:02 left in the first half.

Kentucky ended the half on a 12-5 run that put the Wildcats ahead 35-31. Then they started flexing their muscles inside and making life much more difficult for Tennessee’s offense.

Tennessee continued to hang around early in the second half, but Kentucky went on a 10-0 run to grab a 58-44 advantage and put the game out of reach.

Kentucky: Karl-Anthony Towns had been averaging 13.8 points and 9.5 rebounds in the four games leading up to this one, but foul trouble prevented him from getting in sync Tuesday. Towns picked up two fouls in the first 54 seconds and sat out the rest of the first half. The 6-foot-11 freshman finished with three points and four rebounds.

Tennessee: The Volunteers trail the all-time series 151-67, though Kentucky has more losses to Tennessee than any other program. … Tennessee is 4-13 against teams ranked No. 1. The Vols are 4-5 in their last nine games against topranked teams.