By MARY ESCH
The Associated Press 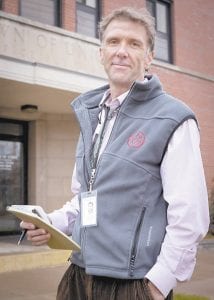 Author Tom Wilber covered the Marcellus Shale natural gas rush for the Binghamton Press and Sun-Bulletin before leaving the paper to write “Under the Surface,” to be released by Cornell University Press on May 8. (AP Photo)

At the local level, the story of America’s unquenchable thirst for fossil fuels is a very human one. Upstate New York journalist Tom Wilber’s new book reads like a character-driven novel as it tells the stories of the winners and losers, industry leaders and regulators on the new frontier of shale gas.

As a reporter for the Binghamton Press and Sun-Bulletin, Wilber began chronicling the story of the 50,000-square- mile Marcellus Shale long before geologists ignited the gas rush with their 2008 announcement that it could be the biggest natural gas field in the United States.

His new book, “ Under the Surface,” to be released May 8 by Cornell University Press, builds on his work as a reporter and later as a full-time author. 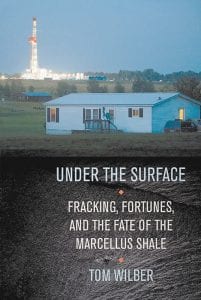 The book jacket for “Under the Surface,” by Tom Wilber is shown. (AP Photo/Cornell University Press)

Books and documentaries have a long history of informing debate on environmental issues, from Rachel Carson’s 1962 book “Silent Spring,” which generated a storm of controversy over chemical pesticides, to “An Inconvenient Truth,” Al Gore’s Academy Awardwinning film on climate change.

That tradition continues with the growing collection of media telling the story of America’s shale gas boom. More works will debut this summer, including dueling documentaries.

The anti-industry “Gasland 2,” an HBO-funded sequel to Josh Fox’s Emmy award-winning 2010 documentary “Gasland,” will be screened across the country to coincide with the election season. The most famous scene in “Gasland,” where a man lights water from his faucet on fire, is an icon of the anti-fracking movement.

Meanwhile, “FrackNation,” an upcoming movie by California couple Phelim McAleer and Ann McElhinney, attempts to debunk Fox’s portrayal of health and environmental ruin. They recently put up a billboard along Route 17 in New York near the Pennsylvania border stating, “The water was on fire in 1669.” That’s a reference to Burning Springs, N.Y., where Seneca Indians showed early explorers water that burned with naturally occurring methane.

Wilber’s book is the second one telling the story of the Marcellus Shale, which extends from southern New York through parts of Pennsylvania, Ohio, and West Virginia. “The End of Country: Dispatches from the Frack Zone,” by Seamus McGraw, was published last June. It grew out of McGraw’s personal experience as a native of rural northeastern Pennsylvania, where shale drilling is intense.

New York state has had shale drilling on hold for four years while it drafts new regulations for controversial high-volume hydraulic fracturing, or “fracking,” which stimulates well production by injecting millions of gallons of chemically treated water deep underground. Gov. Andrew Cuomo has said permits may be issued within months but a strong opposition movement has vowed to prevent it.

Wilber doesn’t push an agenda but tries to maintain a journalist’s objectivity and attention to detail from all angles. As a publication from an academic press, the book was subjected to peer review by experts in the field.

The book is populated with colorful characters. There’s Victoria Switzer, whose once-idyllic retreat in Dimock, Pa., is now surrounded by nearly 100 gas wells. She’s among 32 Dimock families who claim their wells were tainted by Cabot Oil’s operations.

And then there’s Dewey Decker, a cattle farmer in the village of Deposit in New York’s western Catskills. He got neighbors together to negotiate a lease that would protect their land and give them fair compensation. They struck a deal with XTO of Fort Worth, Texas, giving them $2,411 per acre up front and 15 percent royalties. The landowners were instant millionaires in 2008, and drilling has yet to begin.

Wilber also gives a behind the-scenes look at key state regulatory officials at the center of the shale gas policy debate in New York, and how they came to put the brakes on drilling. And he shines light on the lack of transparency in recordkeeping in New York that makes it all but impossible to get a true picture of spills, accidents, and contamination related to gas drilling.

“I’m skeptical, especially given the industry’s reaction from the beginning: ‘Never had a problem,’” he told The Associated Press. “We’ve found problems. We know there are problems and industry has to be held accountable for those.”