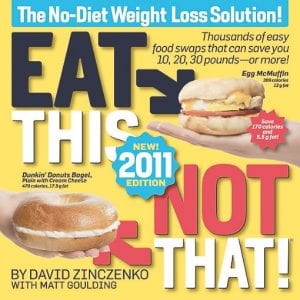 Three years after first telling readers to pick McNuggets over Filet-O-Fish and the low-carb slice over the deep dish pizza, books in the “Eat This, Not That!” series continue to offer sometimes surprising restaurant and supermarket tips.

The latest entries: the 2011 edition of “Eat This, Not That!” and a second “Cook This, Not That!” cookbook offers lowercalorie versions of restaurant favorites like burgers and calzones. That’s 10 books and more than 6 million copies in a series that still sells like hotcakes (which readers are advised to eat with fruit on top, not sugary supermarket syrup).

The “Eat This” concept is simple and clever. Compare similar foods — maybe two sandwiches from the same chain, or two canned soups or chocolate bars — and list the calories, fat, and salt in each. The healthier choice is tagged “Eat This” and the one clogged with bad stuff gets a “Not That!”

So, Krispy Kreme customers are told to go for the sugar doughnut over the over the powdered cake doughnut to save 90 calories while Reese’s Peanut Butter Cups gets the nod over Reese’s Fast Break bar for a 50-calorie savings.

“Is it the healthiest food imaginable? No,” says series co-author David Zinczenko. “But if you try to tell people to put down the burger and go eat some broccoli, they’re never going to make any realistic progress.”

The latest “Eat This” book includes testimonials from users who lost dozens of pounds, but these are not diet books in the strict sense. Just try finding a weight-loss plan that gives readers a green light to eat Cold Stone Creamery’s Oreo Creme Ice Cream Sandwich.

Zinczenko, editor-in-chief of Men’s
Health
magazine, instead educates readers so they can make better — or, in some cases, less bad — choices at a given restaurant and at the supermarket. Order a Pesto Turkey Bullet with tomato basil soup at Quiznos instead of the Turkey Club Torpedo and you’re avoiding 360 calories. Do it 10 times, you have avoided gaining more than a pound.

“Eat This” originated as a feature in Men’s
Health.
Zinczenko and co-author Matt Goulding turned it into a franchise that also includes a book on drinks, a supermarket survival guide and “Eat This, Not That! For Kids!”

Small and square, the books fit in a purse or a glove compartment and the heavy-stock pages can handle ketchup splatter. Though reference books, they are compulsively readable because some of the comparison results are so counterintuitive. The Egg and Cheese Wake-Up Wraps at Dunkin’ Donuts have 150 fewer calories than its sesame bagel with reduced calorie strawberry cream cheese. Who knew?

“I would carry it in my purse when I went to the grocery store,” said Abby Chelian, who received an “Eat This” book and the supermarket guide last Christmas. The 29-year-old Los Angeles-area actress and comedian and her husband used the books to help them lose about 30 pounds each.

There has been grumbling over the years that a better way to lose weight would be to skip fast food altogether, though even some critics concede the series serves as a useful nutritional decoder for consumers. Dietitians like Dawn Jackson Blatner, a spokeswoman for the American Dietetic Association, praised the books for showing “you don’t have to live like an isolated hermit to make healthy choices.”

The food comparison idea is not entirely novel. Weight-loss plans typically advocate swapping one food for another, be it fruit for candy or a pita wrap for bread. Author Dr. Howard Shapiro had previously illustrated how, say, a handful of gummy bears packed the same caloric punch of a pineapple in “Picture Perfect Weight Loss.”

But by focusing on food comparisons within the same restaurant, “Eat This” clearly taps into the zeitgeist of a nation that loves to eat out. The information goes down easily with color pictures and graphics and short, snappy writing (on bearnaise sauce: “don’t let this stuff get within 20 feet of your plate”).

“Some kids have asked to have it read to them at bed time,” Zinczenko said.

The colorful presentation belies the hard hits Zinczenko delivers to the restaurant and food industries. The “20 Worst Foods in America” in the 2011 edition of “Eat This, Not That!” takes shots at big names like P.F. Chang’s, Wendy’s and The Cheesecake Factory, which makes the list with a 2,727-calorie Bistro Shrimp Pasta (the book says the calories are comparable to six Quarter Pounders).

Zinczenko — a former “chunky kid” whose overweight father died young of a stroke — describes his work as a mission, like when it comes to exposing the hidden fat and calories in so-called healthy salads and smoothies.

While there have been angry calls from Men’s Health advertisers and lawsuit threats, Zinczenko said there have been some reforms, too. The latest book takes credit for nudging menu reforms at some chains.

“This has always been to me a food crusade,” he said.