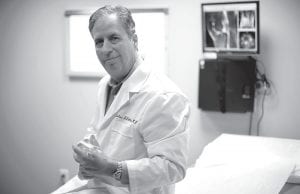 Dr. Nicholas DiNubile at his office in Havertown Pa. DiNubile, an adviser to several pro athletic groups and a spokesman for the American Academy of Orthopaedic Surgeons, says “The boomers are the first generation trying to stay active in droves on an aging frame” and are less willing to use a cane or put up with pain or stiffness as their grandparents did. (AP Photo/Matt Rourke)

We’re becoming a nation of bum knees, wornout hips and sore shoulders, and it’s not just the Medicare set. Baby boomer bones and joints also are taking a pounding, spawning a boom in operations to fix them.

Knee replacement surgeries have doubled over the last decade and more than tripled in the 45-to-64 age group, new research shows. Hips are trending that way, too.

And here’s a surprise: It’s not all due to obesity. Ironically, trying to stay fit and avoid extra pounds is taking a toll on a generation that expects bad joints can be swapped out like old tires on a car.

“Boomeritis” or “fix-meitis” is what Dr. Nicholas DiNubile, a suburban Philadelphia surgeon, calls it.

“It’s this mindset of ‘fix me at any cost, turn back the clock,’” said DiNubile, an adviser to several pro athletic groups and a spokesman for the American Academy of Orthopaedic Surgeons. “The boomers are the first generation trying to stay active in droves on an aging frame” and are less willing to use a cane or put up with pain or stiffness as their grandparents did, he said.

“I wanted to make sure whatever they put in me was going to last,” she said. “I’m not trying to win Wimbledon anymore. I’m trying to get my exercise in,” play a little tennis on the clay courts in Central Park, and walk to a movie or a restaurant. “If I’d known what I know now, I would have had it 10 years ago.”

Joint replacements have enabled millions of people like King to lead better lives, and surgeons are increasingly comfortable offering them to younger people.

But here’s the rub: No one really knows how well these implants will perform in the active baby boomers getting them now. Most studies were done in older folks whose expectations were to be able to go watch a grandchild’s soccer game — not play the sport themselves, as one researcher put it.

Even the studies presented at a recent orthopedics conference that found knee replacements are lasting 20 years come with the caveat that this is in older people who were not stressing their new joints by running marathons, skiing or playing tennis.

“We think very carefully about patients under 50” and talk many of them out of replacing joints, said Dr. William Robb, orthopedics chief at NorthShore University HealthSystem in suburban Chicago.

But many don’t want to wait, even if they’re not much beyond that:

— Karen Guffey, a 55-year-old retired civilian police worker in San Diego, plans to have a hip replaced in September. “I can’t exercise the way I want to. I have to go slow, which is really aggravating. I want to go full force,” she said. “I’m not worried about how I’m going to feel when I’m 75. I want to feel good now.”

— Karen Cornwall, a Havertown, Pa., nurse who played a slew of sports since childhood, had both knees replaced last year when she was 54. “I just felt like I was too young and too active to be in pain all the time,” she explained.

— Bill McMullen, a former Marine and construction worker from suburban Philadelphia, had seven knee repair surgeries before finally getting a knee replacement at age 55 a decade ago. He took up weightlifting to spare his knees but damaged a shoulder and had it replaced two years ago. “People ask me if I’m happy and I say, ‘If you have pain, go and get it done,’” he said of joint replacement. “It was the best thing for me. I have no pain.”

People are urged to exercise because it’s so important for health, but there are “too many wannabes” who overdo it by trying to imitate elite athletes, said Dr. Norman Schachar, a surgeon and assistant dean at the University of Calgary in Alberta, Canada.

“They think if they’ve got a sore knee they’re entitled to having it replaced,” he said. “I think surgeons are overdoing it too, to try to meet that expectation.”

Dr. Ronald Hillock, an orthopedic surgeon in a large practice in Las Vegas that does about 4,000 joint replacements a year, sees the demand from patients.

“People come in and say ‘this is what I want, this is what I need,’” he said. “They could buy a cane or wear a brace,” but most want a surgical fix.

The numbers tell the story. There were 288,471 total hip replacements in 2009, nearly half of them in people under 65, according to the federal Agency for Healthcare Research and Quality, which tracks hospitalizations.

“Five or 10 years ago, a very small number of people under 65 were receiving this surgery. Now we see more and more younger people getting it,” said Elena Losina, co-director of the Orthopaedic and Arthritis Center for Outcomes Research at Brigham and Women’s Hospital in Boston.

She analyzed how much of this rise was due to population growth and obesity, and presented results at an orthopedic meeting in San Diego in February.

From 1997 to 2007, the population of 45- to 64-yearolds grew by 36 percent, but knee replacements in this group more than tripled. Obesity rates didn’t rise enough to explain the trend.

“At most, 23 percent of the 10-year growth in total knee replacement can be explained by increasing obesity and population size,” Losina said.

“This is a very successful operation. The only caveat is, all the successes have been seen in the older population,” who usually put less stress on their new joints than younger folks who want to return to sports. “It’s unclear whether the artificial joint is designed to withstand this higher activity,” she said.

If you have a good result from a joint replacement, don’t spoil it by overdoing the activity afterward, experts warn. Better yet, try to prevent the need for one.

“Being active is the closest thing to the fountain of youth,” but most people need to modify their exercise habits because they’re overdoing one sport, not stretching, or doing something else that puts their joints at risk, said DiNubile, the “boomeritis” doctor.

• Cross training. People tend to find one thing they like and do it a lot, but multiple activities prevent overuse.

• Lose weight. “Every extra pound you carry registers as five extra pounds on your knees,” DiNubile said. “The good news is, you don’t need to lose a lot of weight” to ease the burden.

• Spend more time warming up. Break a sweat and get the blood flowing before you go full blast.

• Let muscles and joints recover and rest in between workouts.

• If you’ve had a joint replacement, do the physical therapy that’s recommended.

“I tell patients, 20 percent of the outcome is the technical stuff I do in the surgery, and 80 percent is them,” said Hillock, the Las Vegas surgeon. “I can do a perfect surgery, but if they don’t do the rehab they’re not going to have a good outcome.”