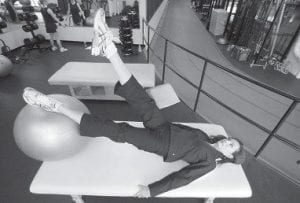 Gayle Parseghian, a 55-year-old ballet teacher from Toledo, Ohio, went through stretching exercises at the Rehabilitation Institute of Chicago during a four-week, intensive “boot camp” program to relieve her chronic back pain. (AP Photo)

Ballet teacher Gayle Parseghian thought she might never dance again after a back injury while moving heavy furniture left her with unrelenting pain.

But an intensive, four-week “boot camp” got the 55-yearold dancer from Toledo, Ohio, back to the barre. The program at the Rehabilitation Institute of Chicago taught her to manage the chronic pain that had tormented her for more than a year.

“It affects your relationship with your spouse, your family, your friends, your boss,” she said. “It’s like you’re trapped in your body and you can’t get out. It’s a feeling of being completely out of control.”

New research suggests chronic pain affects the brain’s ability to rest, disrupting a system that normally charges up some brain regions and powers down others when a person relaxes.

“I ask a patient who has had chronic pain for 10 years to put the mind blank, don’t think about anything,” says Dr. Dante Chialvo, a researcher at Northwestern University’s Feinberg School of Medicine who is not involved with the boot camp.

MRI images show the pain sufferer’s brain lighting up, but not as a normal brain at rest would, he said. “There is an objective biological difference in the brain.”

And they could explain why the boot camp approach worked for Parseghian.

The Chicago program, affiliated with Northwestern’s medical school, attacks pain on three fronts – biological, psychological and social. It does not claim to cure chronic pain, but instead gives patients tools to lessen its hold on their lives.

Patients spend Monday through Friday stretching, exercising and moving in new ways. They meet with a physician, an occupational therapist, a physical therapist, a biofeedback therapist, a clinical psychologist and a movement specialist.

They may address depression or sleep problems or adjust their medications. And they learn from the other patients in the program.

Getting all of these things under one roof differs from most approaches to treating chronic pain, said Dr. Steven Stanos, the program’s medical director.

Patients know the drill. In the fragmented world of health care, they bounce from internist to chiropractor to massage therapist to surgeon – with none of the experts sharing information.

“You will try anything and everything to get out of the pain,” Parseghian said. “You discover all of your efforts are fruitless and you have spent monumental amounts of money.”

Surgery would have been next. She was in a surgeon’s waiting room when she read an article about the boot camp.

If acute pain is the body’s alarm system, alerting to injurycausing dangers, then chronic pain is an alarm going haywire, screaming a warning long after the danger has passed.

In 2005, Americans with aching backs and necks spent $20 billion on prescription drugs and another $31 billion for outpatient doctor visits, according to a recent study in the Journal of the American Medical Association. Total spending on spine treatments increased 65 percent from 1997, adjusted for inflation. But rising alongside that was the proportion of people with spine problems who reported limited function.

Such spending with such poor results gets insurance companies’ attention.

Chronic pain patients’ medical and pharmacy bills “show up on our radar,” said Dr. James Cross, Aetna’s national medical policy chief. The patients are “frustrated and clearly suffering” and “looking for an answer,” he said.

Although boot camp-style programs cost up to $20,000, Cross said that is cost-effective compared to the procedure and pill merry-go-round. The company cites studies showing patients who have completed boot camp programs experience lasting pain reduction and lower stress. Aetna also believes patients completing the programs are more likely to return to work and less likely to seek other expensive treatments.

Other insurers also cover the programs, but convincing more companies will take more evidence, said Dennis Turk, a pain researcher at the University of Washington in Seattle and a believer in the approach.

It is unclear what combination of therapies works best for which patients and whether four weeks are needed for everyone, Turk said. Patients should be cautious because quality varies, he said.

“Anybody out there can put up a sign and say, ‘I’m a comprehensive pain rehabilitation program,”‘ Turk said. He recommended programs affiliated with university medical centers and the nearly 100 interdisciplinary programs accredited by the Commission on Accreditation of Rehabilitation Facilities.

Two weeks into the boot camp, Parseghian’s husband vis- ited her in Chicago for the weekend. They toured an art museum and went shopping together. Later, he phoned her with an observation.

“You didn’t say one thing about your pain or the back. That used to monopolize our conversations,” her husband told her.

That impressed Parseghian. “I guess I hadn’t realized just how much my back issue had really manifested itself into our relationship,” she said.

Two weeks later, she headed home with a detailed schedule for her first week back, including plenty of time to relax. She knew the staff would check with her in another four weeks to see how she was doing.

And she was armed with breathing techniques and phrases to repeat when she suffered a flare-up: “This has happened before and I have survived it. I’m going to be OK.”

During her second week home, she reported, “I took my first ballet class last week.”

“I thought that day would never come,” she said. “Little by little, I’m regaining the control in my life that I thought the injury had robbed me of.”