Born between 1945 and ’65 and live in Kentucky? You should be tested for Hep C 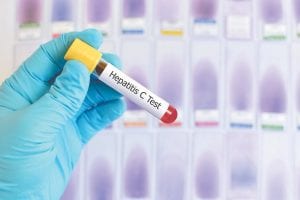 Many Kentucky residents are infected with hepatitis C but don’t even know they have the potentially fatal disease. People born between 1945 and 1965 are at the highest risk and should be tested, says Dr. John Ward of the Centers for Disease Control.

Kentucky has the highest rate of hepatitis C infection in the nation, and many who have it don’t know they are infected and could be at risk of dying from it, even though it is easily diagnosed through a simple blood test and medications to treat it that are 90 percent effective.

“Upwards of about 37 percent of people living with hepatitis C will eventually die of a hepatitis C related complication in the absence of testing, care and treatment,” said Dr. John Ward, director of the Division of Viral Hepatitis at the federal Centers for Disease Control and Prevention.

Hepatitis C is spread when blood from an infected person enters the body of someone who is not infected. Today, it is primarily spread by people who inject drugs, but it can also be transmitted through sexual intercourse, inhaled drugs, unregulated tattooing and between mothers and babies during delivery.

Overall, Kentucky saw a 240 percent increase in acute hepatitis C between 2009 and 2013, and a recent CDC study found the rate of hepatitis C infections among Kentucky women of childbearing age, defined as 15 through 44, more than tripled, from 275 cases per 100,000 women to 862, an increase of more than 200 percent. The national increase during this period was only 22 percent.

Ward also pointed out that people born between 1945 and 1965 are at risk of being infected with hepatitis C and should be tested. He noted that one out of every 30 people born between these years has been infected, most of them before the virus was discovered in 1989.

Once infected with hepatitis C, about 70 percent of those infected in the U.S. remain infected for life, which can lead to serious conditions. The CDC says that of every 100 people infected with hepatitis C, 75 to 80 will develop a chronic infection; 60 to 70 percent will go on to develop chronic liver disease; five to 20 will get cirrhosis over a period of 20 to 30 years; and as many as five will die from cirrhosis or liver cancer.

Ward noted that as of 2014, more than 20,000 people are dying from hepatitis C a year, which he called a conservative estimate because of poor reporting on death certificates.

Ward pointed out that many of these cases could have been treated with early diagnosis and the use of newly developed medications that have a 90 percent cure rate, estimating that by simply testing people who were born between 1945 and 1965, as well as those who inject drugs and treating them, “We could save over 321,000 deaths between now and 2030.”

“We’ve had a transformational event in the history of medicine,” Ward said. “For the first time we are able to treat and cure a chronic viral infection.”

However, Ward noted that a long list of barriers to treatment still exist, including: outdated policies and clinical protocols that guide testing and treatment, poor provider knowledge, limited public health data, denial of reimbursement claims for testing and treatment and the high cost of treatment, which he said currently runs between $32,000 and $56,000 on most health plans.

“Cost has been a big, big issue for many health systems,” he said.

But Ward also offered some hope, saying that a recent survey found that 14 of 36 state Medicaid programs have broadened their Medicaid reimbursement policies to either include people earlier in the disease process or to allow those who abuse alcohol or injection drugs to be tested and treated.

He also noted that while the price of treatment is still high, it cost less than it did when it was first introduced, which was upwards of $90,000 per treatment. And most importantly, he said the cost of treatment has become less than the long-term cost of caring for someone with hepatitis C.

“A look at cost-effectiveness shows that it is becoming very economical and a good value for the health system to treat people with hepatitis C,” he said. “The economic justification for restricting patients and their access to life-saving medicines is falling away.”

Ward encourages Kentucky, and other states, to use multiple approaches to stop the spread of hepatitis C, including needle-exchange programs, medication assisted therapies for substance abusers and a robust testing and treatment program.

“Even though the trends are heading in the wrong direction, it doesn’t mean we can’t think big and be optimistic,” he said. “ We have powerful drugs that are safe and very tolerable for patients to take and prices are falling for those and we have prevention intervention that can have a huge impact on decreasing incidence.”