Bothered by ladybugs? Stink bugs will be worse 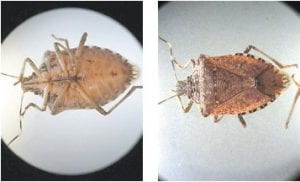 Letcher County Extension Agent Shad Baker photographed the front, left, and back of a stink bug with a microscope. Baker expects the bugs to become a major nuisance to Letcher County residents within two years.

Another pest may be on its way to Letcher County, a local extension agent warns.

The insect, which is about 5/8 of an inch long and 3/8 of an inch wide, was introduced into the United States in the late 1990’s from China, Japan and Korea.

Baker said the shield-shaped bug has not yet been sighted in Letcher County, but he said they could be in abundance in the county in a couple of years.

“When it hits we expect our office to be flooded with calls,” said Baker.

Baker hiked 62 miles on the Appalachian Trail in northern Virginia and central Maryland Oct. 8 through Oct. 12, and decided to cut his trip short because he couldn’t deal with the large clusters of stink bugs any longer.

“We couldn’t take any more of it,” said Baker. “This was way worse than the ladybugs ever thought about being. I have never seen anything like it.”

Baker said it is hard to describe the potent smell, which he referred to as fume-like.

“They stink like crazy,” said Baker. “It’s hard to get them out of stuff .”

The marmorated stink bugs have already been found in the Kentucky counties of Boyd, Jeff erson and Greenup. Baker said the stink bugs normally appear in homes first, then begin to damage gardens and crops within a couple of years after their initial appearance. These “sap feeders” attack sweet corn, field corn, apples, peaches, bell peppers and tomatoes.

Baker said one orchard owner had sprayed his crops the maximum amount, which is once every seven days, and still lost 40 percent of his apple crop.

“That’s going to affect people,” said Baker. “They have told us it is impossible to prevent the spread. It is going to be a really bad problem.”

The United States Department of Agriculture (USDA) is researching a parasitic wasp which feeds on stink bugs, he said.

“There is hope that this won’t be a long-term problem,” said Baker.

He said the outbreak may be like the Japanese beetle that came on strong, peaked and then leveled off .

“Before it hits, they need to get their homes sealed up,” he said. “Looks like they will have a year or so to do so, but they need to do it now.”

Meanwhile, for homeowners now battling what has become the annual fall emergence of Asian beetles, or ladybugs, Baker recommends using an insecticide spray with the active ingredient Permethrin to help eliminate them.

Baker said ladybugs are attracted to the sides of houses that get evening sun.

Insecticides containing Pyrethrins work well on getting rid of ladybugs after they enter a home.