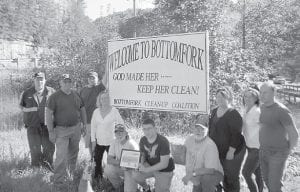 A group of Letcher County citizens has been recognized for teaming up to keep their community clean.

The Bottom Fork Cleanup Coalition, led by Nathan Polly, earned the PRIDE Volunteer of the Month Award for October 2013. The award is given monthly to one person or group in a 42-county region of southern and eastern Kentucky.

“These concerned citizens are dedicated to keeping trash and dumps off Hwy. 3406 and the surrounding roads,” said PRIDE’s Mark Davis, who presented the award.

“When a group of neighbors come together like this, they can make a huge difference, and we want to thank them and share their story with other groups that are looking for a project,” Davis said. “They will tell you that volunteering together is actually fun and builds up their sense of community, too.”

“This group does this all year to keep their neighborhood clean but especially during PRIDE Spring Cleanup Month in April,” said Gary Cornett, Letcher County Solid Waste and PRIDE coordinator, who nominated the group for the PRIDE award.

“Nathan never fails to ask if any other groups need help with other cleanups,” Cornett added about Nathan Polly’s leadership.

“PRIDE also thanks Gary Cornett for bringing this coalition to our attention and for his years of service as the county’s Solid Waste and PRIDE coordinator,” Davis said. “We wish him the best in retirement.”

Congressman Hal Rogers co-founded PRIDE in 1997 with the late General James E. Bickford, who was the Kentucky Secretary of Natural Resources and Environmental Protection.

The PRIDE web site is www.kypride.org.