BOTTOMS UP FOR PROGRESS 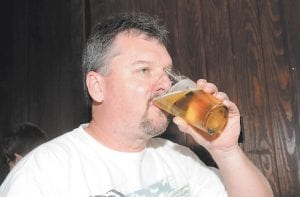 Tom King was among those who were present Friday afternoon when alcohol was sold legally in the City of Jenkins for the first time since 1944. King, of Jenkins, was enjoying a draft beer with dinner at the new Las Peñas Mexican Restaurant. The restaurant, located next to the new Jenkins Swimming Pool, is the first establishment to be granted a state Alcohol Beverage Control license to sell alcohol in Jenkins since the town’s citizens voted overwhelmingly in May 2011 to allow beer, wine and spirits to be served in restaurants seating at least 50 people. The restaurant is owned by Charles Colwell. (Photo by Chris Anderson)