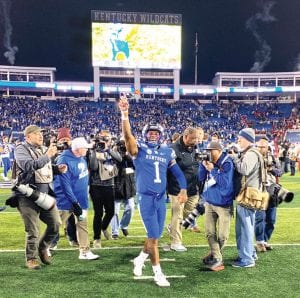 Lynn Bowden celebrates at midfield after turning his first collegiate start at quarterback into a win for Kentucky over Arkansas. (Laci Robinson Photo)

My guess is that no one who watched Lynn Bowden play high school football in Youngstown, Ohio, was the least bit surprised by what he did to lead Kentucky to a 24-20 win over Arkansas last week.

He was Kentucky’s emergency starter at quarterback and all he did was run 24 times for 196 yards and two scores and complete seven of 11 passes for 78 yards and another score. It was the most rushing yardage by any UK player against a SEC opponent since running back Rafael Little ran for 198 yards in 2005 and second most rushing yards by a quarterback in school history behind the 208 yards Mike Fanuzzi had in 1974 – and was exactly the kind of thing he did in high school when he was a four-star recruit.

Bowden primarily plays receiver and came into the Arkansas game with 114 catches for 1,303 yards and six touchdowns in his three years at UK.

“I was not surprised because that is what he does,” Kentucky offensive coordinator Eddie Gran said. “Everything is just natural for him.”

It is, but don’t think he didn’t work a lot the previous two weeks when UK coaches were convinced Sawyer Smith, who took over at quarterback when starter Terry Wilson went down with an injury in week two, would not physically be able to play.

“ The last two weeks when we talked to Lynn about playing quarterback he totally bought in,” UK quarterbacks coach Darin Hinshaw said. “He was early to ev- ery meeting, constantly watching film, taking notes. He was taking it serious and not just wanting to be a wildcat quarterback but showing he wanted to play quarterback.”

He was a superb quarterback at Warren Harding High School in Youngstown where he threw for 1,366 yards, ran for 2,277 yards and accounted for 57 touchdowns his senior season. He drew comparisons to former UK star Randall Cobb and was considered one of the most dynamic playmakers in the country by many. Yet just as home-state Tennessee paid little attention to Cobb, Ohio State never really made a serious effort to recruit Bowden — a top 60 player in his recruiting class. Never mind that he was Ohio’s sixth all-time leading rusher with 7,387 yards and 10th in rushing touchdowns with 91. Ohio State worried about his academics and off-field demeanor.

Vince Marrow, a Youngstown native, recruited Bowden for years. He called him “maybe the most talented dude” ever to come out of Youngstown, a town that has had a ton of great players, and thought UK would be the perfect place for him to succeed – and was right.

Arkansas coach Chad Morris called Bowden an “unbeliev able football player.” He said the Razorbacks expected Bowden to be at quarterback — and they still couldn’t stop him. Arkansas linebacker De’Jon Harris said he was a “hell of a player” because he makes “right plays at the right moment.”

SEC Network analyst Jordan Rogers, a former Vanderbilt and NFL quarterback, has no problems with Bowden staying at quarterback for UK even if Smith is physically ready to go at Georgia.

“He has shown he can do enough in the pass game to keep defenses honest and keep them balanced,” Rodgers said. “You want the ball in the hands of your best player and this way they can do that.”

Former UK running back Anthony White is not sure. He wonders now that SEC defenses have seen what Bowden can do if they won’t keep a linebacker in the middle of the field as a “spy” on Bowden and contain the lanes outside to cut him off there.

“It’s harder to gain yards when teams can see film and scheme against you,” White said. “You want the ball in Lynn’s hands as much as possible but I am not sure he is the answer at quarterback. I do have faith in Eddie Gran that if he keeps Lynn back there, he could be effective. I think he can throw the ball if you need him, too, but I prefer he use his legs and I just worry teams will game plan to contain him.”

Hinshaw said hopefully Smith gets back to where he can practice this week and show he could be ready to play at Georgia Saturday night. However, Bowden certainly indicated after the Arkansas win that he would comfortable staying at quarterback, something teammates seemed to fully embrace, too.

If that happens, Hinshaw says there is more Bowden can still do because he’s smart and understands the offense just like Cobb did when he was at UK.

“It was so enjoyable to have him in the (quarterback) room and engaged and being a sponge and learning the position of quarterback,” Hinshaw said. “He put in the time and you could tell he was ready and now obviously there is a lot more we can with him passing and some more running if that’s the way we go.”

Former Kentucky tight end C.J. Conrad started a program where UK football players make a weekly visit to Kentucky Children’s Hospital to spend time with patients and their families — a program that continues this year even after Conrad’s graduation.

It’s a rewarding program for Jennifer Guilliams, child life coordinator at Kentucky Children’s Hospital. However, she does have to try and figure out who the UK football players see on their visits.

“We try to get them to see as many patients as they can keeping in mind their school and practice schedules,” Guilliams said.”We look each week at what our patient population looks like and which families and patients can get the biggest boost from the visits. Sometimes the players stay 2-1/2 hours and get to see every patient. Normally they are here for about an hour.

“My staff really looks at what families need today and how to help them get through the illnesses and find some comfort.”

The players visit year-round except in the summer under the coordinator of Courtney Love, UK’s director of player development. Conrad started the program not as a media event but as a way to help young patients.

“C.J. wanted it about the kids, not the football players,” Guilliams said. “We have tons of visitors to the hospital and are blessed that people bring things to brighten up the patients’ stays. But there is just something that is community with these football players. The families feel so much more connected to UK and to these players because of these visits.”

Last week it was quarterback Sawyer Smith, offensive guard Luke Fortner and kicker Matt Ruffalo visiting Kentucky Children’s Hospital. Smith had been so beat up physically that he didn’t even throw a pass during UK’s open week but called the visit to the hospital “inspiring” for him.

Fortner says the goal is to help take the patients’ minds off their problems but often the players get more from the visits than the patients.

“Kids are the best because you never know what they are going to say. They always make you smile. It may sound a little selfish, but when I’m having a bad week I come and it makes my week a lot better. They don’t know it, but they are giving me a lot in return,” Fortner said.

Guilliams says what the football players have been doing gives the hospital staff a sense of pride and community because they see the support the hospital has.

“I have been here 2 1/2 years and one thing that drove me here was the sense of community in this university,” Guilliams said. “What these players do for our patients and their families is just special. We have kids that are frequent patients here and they look forward to the Tuesday visits from the players. They will talk about getting posters or football signed after the players leave.

“I have seen parents that have been through some of the worst times of their life and are feeling out of control and visits from these football players brightens their days. It really is amazing. The players are just 100 percent genuine. They will go to any child, go to any room and spend as much time as they can. One time I had to tell the guys they could not play video games for 45 minutes with just one patient.

“They don’t do it for any reason other than they just want to be there for those kids and to me, that makes these athletes pretty special.”

“If a football team has a great receiver, you just throw it up to him and he comes down with it,” Sisk said. “Put Clarke in a one-on-one situation and give him the ball and he is going to score. (John) Calipari has not had anybody like that. John Wall was dynamic and a playmaker but with Clarke you can just say go get a basket and he will do it.

“If he gets his 3-point shooting down to where he makes that shot consistently, he could be unstoppable,” Sisk said. “He can get to the rim. He’s really good with the midrange game. The more you beat and bang on him, the better he is. He does not have to have uncontested shots. He can still blow by a defender and make tough shots.

“When he gets on the court, he just looks the part of a great player. He will go get every loose ball, make every tough play. You just can’t coach some of the things he can just do.”