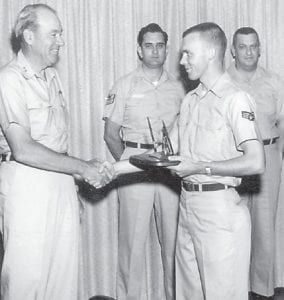 General Cunningham, Everett Vanover’s boss for many years and a hero bomber pilot in Europe who flew many missions during World War II, gives an award to Everett Vanover and his bowling team on January 1, 1960. The team won the base championship. Vanover also received awards for the highest average, high game of 270 and picking up the 9, 10 split. January 1 was also the day Vanover was promoted to master sergeant.