Dies in mishap in yard of Blackey home 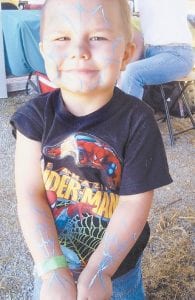 Family members of a five-yearold cancer survivor who died in a freak accident at Blackey Saturday want people to wear superhero attire at his funeral on Thursday.

“He was trapped between the riding toy and the frame of the trampoline,” said Baker. “The family pulled him from the toy, started CPR and called 9-1-1.”

Logan was transported to Whitesburg Appalachian Regional Hospital where Baker pronounced him dead at 3:55 p.m.

An autopsy was performed in Frankfort to determine whether asphyxiation or a neck injury was the cause of death. Final autopsy results have not been released.

Logan, who lived at Redfox in neighboring Knott County, had been diagnosed with retinoblastoma, a rare type of eye cancer. He had a prosthetic left eye, and had been cancer-free for two years.

Jessica Sparks, Logan’s aunt, said she thinks Logan turned his head to look at something while he was riding the Power Wheels Ford F-150 truck and didn’t see the trampoline.

Sparks said she and Logan had been at her boyfriend’s parents’ residence for about 10 minutes when the tragic mishap occurred. Family and friends were gathering at Leeroy and Diana Combs’s Blackey home to celebrate Sparks’s birthday. She and Logan arrived early.

“I had just picked him up,” said Sparks.

Clint Howard and Jaimie Sparks, Logan’s parents, were both working.

Logan and Jessica Sparks’s sister had made Sparks a birthday cake and Logan had already eaten some of the cake.

“He had blue icing all over his mouth,” said Sparks. “As soon as he got there he ran and jumped on the Power Wheels. He stayed outside.”

Logan and a four-yearold cousin were both riding battery-powered toy vehicles while four adults were sitting on a porch nearby watching the children play, Sparks said.

“He was not left unsupervised one minute,” said Sparks.

Batman, Spider-Man and the Red Ranger from Power Ranger were his favorites.

“He loved to swim, play outside and play on the trampoline,” said Sparks.

“That kid always smiled,” Sparks added. “He didn’t know a stranger. He would talk to anyone.”

Logan enjoyed collecting tabs from soft drink cans to help others with cancer. Sparks said Logan would ask anyone he came in contact with to save pop tabs.

“He has three of four pickle jars full of pop tabs,” said Sparks.

“He was a neat, neat kid,” said Madden. “He was humble. He was happy and jubilant all of the time. He was a good, sweet, precious little soul. He was adorable.”

Madden said Logan had already captured the hearts and attention of students and staff.

“Logan was one who could be counted on for a hug as he passed in the hallway and a bright spot for all who had the privilege of working with him,” said Madden.

Leigh Nichols, Logan’s kindergarten teacher, said the child was friends with everybody.

“He was very sweet and always smiling,” said Nichols.

Madden visited each classroom Monday and told students what had happened. A school psychologist and all elementary counselors in the district as well as counselors from Knott County and Kentucky River Community Care were at the school Monday.

“They are doing okay,” said Madden. “They have talked about him and are writing about him.”

Madden said students will write notes to Logan, which will be attached to helium balloons and released later this week.

“ We are going to do things all week to honor him,” said Madden.

Visitation for Logan will be held beginning at 2 p.m. today (Wednesday) at Jeremiah Missionary Baptist Church.

The funeral service is set for 1 p.m. on Feb. 14 at the church. Letcher Funeral Home has charge of arrangements.

Family members ask those who attend visitation or the funeral to wear superhero attire in memory of Logan.