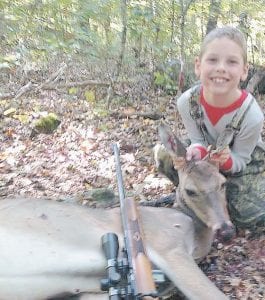 Dylan Ford Watts was all smiles after his success on opening day of Kentucky’s youth-only hunt.

I love to write about parents who still take their children out to hunt in these beautiful mountains God has given us. This is such a story.

My longtime friend Martha Watts has a corker of a grandson. His name is Dylan Ford Watts, and his parents are Dennis and Jocelyn Watts of Hallie. This up and coming young hunter is also a grandson of Darrell, Martha’s husband, and Laramie and Sharon Adams. He is seven years old, attends Letcher Elementary School, and has a sister named Malarie.

It has been many years since I saw his granddad, Laramie, but I know he had to be excited for his grandson. Laramie used to stop by my house at Dry Fork when I had the Dog House and beagles.

Now to the story: It seems that Dennis got Dylan out of bed and headed into the mountains on opening day of Kentucky youth season. Dennis needs an “A” just for getting that done, as kids like to stay up late and on their computers. But Dylan was ready to go.

It was told to me that Dylan was super excited — not just excited, but super excited. Dennis was starting to worry that Dylan was so excited he wouldn’t be able to sit still. Dylan, at the ripe old age of 7 going on 20, is following in the footsteps of many a good mountain hunter, but he has done it much sooner.

The old saying, “if it is brown, it is down” was not only on Dennis’s mind, but Dylan’s mind also. Dennis knew he would never be able to contain Dylan if a deer stepped out, so he was resolved to the fact that Dylan was going to pull the trigger. And when a giant doe walked into the clear that is what happened. Dylan had just killed his first deer!

Dylan has a love for hunting and the outdoors, and was “over the moon excited” about his successful hunt. He told Dennis and Jocelyn and other that the doe was “10 feet long.” Then, after thinking it over for a while, he said it might not have been 10 feet long, but it sure was a big ol’ doe!

Here’s a tip of my hat to you, Dylan. Keep up the good work.