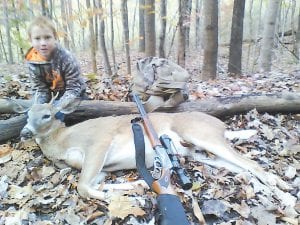 While many adults, including Mountain Eagle hunting columnist Steve Brewer, went through the 2014 modern firearm deer season with no luck, others did quite well, including eight-year-old Preston Hammonds of Mayking. Preston got this four-point buck at Colson while hunting with his grandfather, Jeffrey Hammonds. He is the son of Ricky Hammonds and Beth Collins of Mayking. Other grandparents are Marie Hammonds, Colson, Jeffrey Collins, Mayking, and the late Clydena Collins.