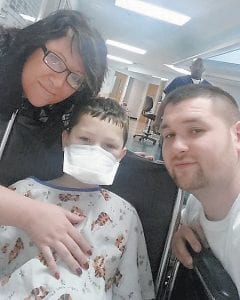 Luke poses with parents Abby and Jonathan Polly after his diagnosis.

Luke Polly, a son of Jonathan and Abby Polly of Mayking, was diagnosed with childhood acute lymphoblastic leukemia (ALL) on January 28 at Niswonger Children’s Hospital in Johnson City, Tenn.

At 3 a.m. last Thursday, Luke and Abby Polly were flown by an air am- bulance aircraft to St. Jude Children’s Research Hospital in Memphis, Tenn.

Luke was cared for in the intensive care unit until Friday. He underwent surgery on Saturday.

Luke will be in Memphis for eight weeks undergoing chemotherapy. Then Luke and his parents will travel often to Johnson City, Tenn. for two and a half years for chemotherapy.

Abby Polly said that her son came down with influenza, but was having breathing problems after he recovered from the flu. She said he is an active child and wasn’t acting like himself. 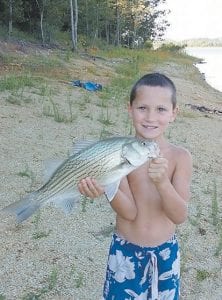 Luke Polly, 8, must spend at least eight weeks in a Memphis, Tennessee hospital undergoing chemotherapy treatments before he can get back to catching fish like this one he was photographed with last summer.

“Luke never sits or takes a nap,” said Abby Polly. “He was falling asleep at school.”

Two days after Luke was diagnosed with leukemia, Rebecca Fields, a friend of the Pollys, raised $1,209.36 at a bake sale in Isom. A bake sale in Jenkins raised $400 on February 3.

“It is very expensive having to drive to and from their home in Letcher County to Tennessee,” said Fields. “Not only do they have that expense, but they still have their everyday bills that are due. I don’t want them to have to worry about bills. They need to spend every second with little Luke and focus on getting him better.”

Fields is organizing a benefit concert to begin at 5 p.m. on February 20 at the Letcher County Central High School auditorium. Taylyn Combs, Shelley Young, Jeremy Dempsey and the band Exit 23 from Pikeville will perform. Admission is $10 per person.

Fields says many people have offered a helping hand.

“I’ve had so many phone calls and text messages,” said Fields. “People that I don’t even know are coming up to me asking how he is. He has become a very well known little boy in a small town.”

Abby Polly said that she and her family are completely amazed by the outpouring of support her family has received in the past week.

“We are so grateful that the community and county has been behind us,” said Abby Polly. “There are just so many people we want to thank.”

Luke is a second grader at Martha Jane Potter Elementary School who enjoys fishing, swimming, playing outside and getting dirty.

“He is just a complete boy all around — fourwheelers, motorcycles, football and video games,” said Abby Polly.

Donations can be made at Whitaker Bank in Whitesburg. Donate online at www.idaniella.com/luke-polly-cancer-fund/.

“Just keep the prayers going and continue to support team Luke for they have a long, hard road ahead of them,” said Fields.