Boy thanks firefighters for saving his house 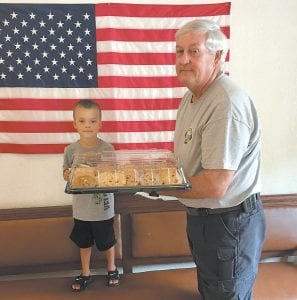 Five-year-old Drake Wright presented cookies to Whitesburg Fire Chief Gary Mullins in appreciation of firefighters who kept Drake’s house from burning down. Drake is the son of Kasey and John Eric Wright of Whitesburg.

What says thank you better than a large platter of cookies?

Kasey Wright said her five-year-old son Drake asked to take cookies to the Whitesburg Fire Department as a thank you for keeping their home located on Frazier Avenue in the Upper Bottom section of Whitesburg from burning.

Wright woke up around 6 a.m. on July 12 to the sounds of a smoke alarm. She immediately called 9-1-1 and said a firefighter arrived at the house within four minutes of her call.

A belt on a treadmill had caught fire, creating billows of black smoke in the basement, said Whitesburg Fire Chief Gary Mullins. The cord to the treadmill was plugged into an electric outlet, but the machine hadn’t been used in a couple of years, Wright said.

No member of the family was injured, nor were their two cats and a hamster. The basement did sustain smoke damage.

Drake delivered cookies and a thank you card to Mullins on July 14.