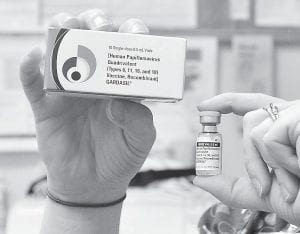 A child health nurse holds up a vial and box for the HPV vaccine brand name Gardasil at a clinic in Kinston, N.C. About 1 in 5 adolescent boys have rolled up their sleeves for a vaccine designed to prevent cervical cancer in girls. (AP Photo/Daily Free Press)

When the HPV vaccine was first recommended for boys, health officials worried it would be an unusually hard sell. But a new report suggests that might not be the case.

About 1 in 5 boys got at least one of the recommended three doses last year, relatively good for a new vaccine aimed at adolescents.

The shots are largely intended not to protect boys from disease, but to stop them from spreading a sexually transmitted virus to girls that could cause cervical cancer.

The vaccine hasn’t been very popular among girls. The government report issued last week is the first real sense of how many boys are getting the shots.

“It’s a good start,” said Shannon Stokley, a vaccination expert with the Centers for Disease Control and Prevention.

The vaccine was first recommended for girls ages 11 and 12 because it works best if given before a teen starts to have sex. In 2011, it was also recommended for boys that age to help prevent the virus’s spread.

The CDC report covers vaccination rates for last year, the first full year since the shots were advised for boys. It’s based on telephone calls to families for about 19,000 boys and girls ages 13 to 17.

About 21 percent of the boys had gotten at least one of the three doses. Less than 7 percent were fully vaccinated.

The rates look relatively good compared to the initial rates for some other vaccines aimed at adolescents. For example, the initial rate for a meningococcal vaccine was just 12 percent.

Rates tend to start low when a vaccine is first recommended and build after. So the HPV numbers for boys are reason to be optimistic, said the CDC’s Dr. Melinda Wharton, although she added a word of caution.

“Given how the coverage level has stalled for girls, though, a solid start isn’t enough,” she said.

For girls, the initial rate for at least one HPV shot was 25 percent. Last year, it was about 54 percent and hadn’t changed much from the previous two years. Only a third was fully immunized with all three doses last year.

“We’d really like to do much better with boys and girls,” Wharton said.