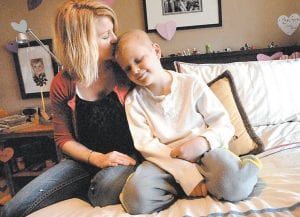 A rare bacterial infection contracted at a Denver-area hospital by a boy who is battling leukemia prompted a national recall of tainted alcohol wipes.

The surgical prep pads, swabs and wipes manufactured by the Triad Group of Hartland, Wis., are suspected of being contaminated with a potentially deadly bacteria. The product was voluntarily recalled by the company on Jan. 5 following a federal Food and Drug Administration investigation.

Two months later, the boy’s mother, Jessica Armstrong, remains on a mission to make sure what happened to her son does not happen to others.

The Triad products were widely used in medical facilities around the country, and were also available for retail sale to consumers under a variety of product names at Safeway, City Market and Walgreen’s stores.

“Anyone who has or thinks they may have these prep pads or wipes in their home needs to check to confirm the manufacturer, and discard them in the trash immediately,” said Armstrong, of Glenwood Springs, Colo.

Her family’s ordeal received national media attention with an MSNBC report this month. That report referred to several infection cases around the country blamed on the Triad wipes, including one involving the death of 2-year-old boy in Texas in early December.

Jessica and husband Noel Armstrong’s story began when their 10-year-old son, Peyton, was air-lifted to Children’s Hospital in Aurora on Oct. 18, 2010, after he had been extremely sick for several weeks.

At Children’s, he was diagnosed with a type of leukemia that required quick action. Peyton had surgery to insert an internal catheter so he could immediately begin chemotherapy.

“Within 12 hours of the surgery, in the middle of the night, he started having this excruciating pain,” his mother said. “We really weren’t sure what to expect, and we knew it was a painful surgery. But this was defi- nitely not right.”

Soon, the pain was accompanied by a fever, indicating that Peyton had contracted an infection. Infectious disease experts were called in, and the cause of the infection was narrowed down to the Bacillus cereus bacteria.

“We were told that it’s something not usually seen in hospitals,” Armstrong said. “They said it was very serious, and they were going to do everything they could to help him.”

Peyton was put on strong antibiotics to stabilize his condition, and had to undergo another emergency surgery, followed by a stay in the intensive care unit, she explained.

Because of concerns about Peyton’s case and a series of similar infections involving other young patients, Children’s Hospital officials contacted the FDA.

In late November, Children’s confirmed that the source of the bacteria was the surgical prep pads, which the hospital had contracted with Triad to supply.

According to the MSNBC report and other published reports, the FDA had previous concerns about contamination and sterilization at Triad dating back to 2009.

With the new information, Triad voluntarily issued the product recall in early January.

“Peyton’s case was the catalyst for breaking this investigation, because his surgical site was infected,” Jessica Armstrong said. “It was very telling, because it was different than a bloodstream infection.”

But she’s still worried that, even after hundreds of thousands of letters went out to medical facilities and retailers, that the tainted wipes may still be lingering in home medicine cabinets or medical kits.

“It’s sad that it’s taken some time to get this information out. That’s what’s scary to me,” Armstrong said. “A lot of people who have diabetes buy these kinds of wipes to prep before injections.” (AP)