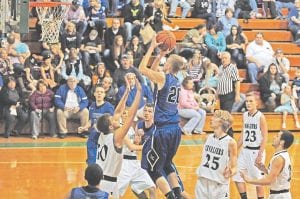 Letcher Central’s Josh Owens went up for a shot during the Cougar’s 83-46 win at Jenkins. No. 25 for the Cavaliers is Jeffrey Newsome. No. 23 is Jordan Bentley. (Photo by Chris Anderson)

Over the past week, the Letcher County Central Cougars have weathered a tough part of their schedule with late January games against three of the top four teams in this region.

After losing badly on Jan. 20 at 11th- ranked Knott County Central, LCC then lost in double overtime to Cordia at home on Jan. 23.

Next, the Cougars were worn down by visiting 23rd- ranked Perry County Central, 66-58, last Thursday night.

Instead of looking back, the Cougars rebounded with a solid 83-46 victory at Jenkins (4-15) Jan. 31, and followed up that win with another solid performance in beating Lee County (4-15) 74- 49 Saturday afternoon at Perry County Central High School in the Appalachian Wireless Kentucky Prep Showcase.

LCCHS is 14-10 and entering the final four games of the regular season. The Cougars travel to Cordia (17-6) Friday evening, Feb. 7, to take on the Lions who are fresh off a runner-up finish last Sunday afternoon in losing 72-61 to fourth-ranked Newport Central Catholic in the All “A” Classic state tournament in Frankfort.

The visiting Commodores, led by All-State performers Justin Johnson and Braxton Beverly, pulled away from the tenacious Cougars down the stretch for the 66-58 win on Jan. 30.

Johnson, a 6- 7 senior who is headed to Western Kentucky University next fall, led the 16-5 Commodores with 18 points and 19 rebounds while Beverly, a sophomore, chipped in with 16 points.

With Letcher Central controlling the pace of the game in the first half, Perry Central only led 10-9 after the first quarter and 24-23 at the break.

In the second half, Perry Central used a renewed defensive pressure to force the Cougars into more of an uptempo pace which resulted in some poor shots taken and some critical turnovers.