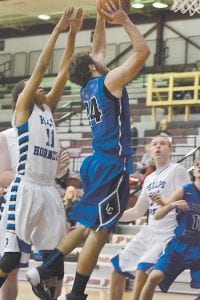 The Letcher County Central Cougars have been busy over the holiday season with back-to-back holiday tournaments — two weeks ago in Gatlinburg, Tenn., and this past week in the eight-team, threeday Pikeville Invitational.

After suffering three tough losses in Gatlinburg, the Cougars rallied and took two of three in the Pikeville Invitational to even their record at 6-6.

The Cougars next play at Knott County Central on Jan. 2, and then return home to play June Buchanan School on Jan. 6.

Led by the senior duo of Chippy Frazier and Josh Owens, the Cougars outlasted the Jaguars 69-67 in the final round of the Pikeville Invitational Dec. 28 to even their record at 6-6.

The game was hotly contested from the opening tap between two teams evenly matched. LCCHS managed to lead 9-8 after the first quarter and then pushed its advantage to 27-22 at the half, but could never put any real distance between itself and the Jaguars.

LCCHS led 48-44 after three quarters and held on down the stretch for its second win in three days.

The Panthers broke open a close game in the final quarter to pull away for the 65-58 victory in the second round of the Pikeville Invitational Dec. 27.

The teams were tied 14-14 after the first quarter and 23-23 at the half. Led by Zack Huffman’s team-high 18 points, the Panthers pushed their lead to 38-34 entering the final quarter and steadily pulled away to their second win of the season against seven losses.

The Cougars easily defeated Phelps, 78-47, Dec. 26 for the second time this season, in the opening round of the Pikeville Invitational to even their record at 5-5.