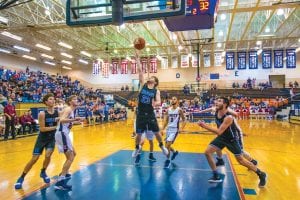 Letcher Central’s Caleb Stidham lifts the ball toward the goal while teammates Dylan Webb, at left, and Tyler Boggs, right, move toward the shot in the 53rd District Championship game. The Cougars fell to Knott Central, but advanced to the 14th Region Tournament. On Tuesday, the Cougars’ season came to an end when the team fell to Powell County 47-46 in the opening round. (Photo by Chris Anderson)

The Letcher County Central Cougars fell short by a single point Tuesday night as their 2018-19 basketball campaign came to a close with a 47 to 46 loss to host Powell County in the boys’ 14th Region Tournament at Stanton.

While Powell County moves on to face the winner of last night’s Hazard vs. Breathitt County tilt on Friday, Letcher Central returns home to reflect on a season in which they competed very well on their way to finishing with an overall won-loss record 18-12, including a 10-7 record in the 14th Region and a 5-3 record in the 53rd District, where they finished as runners-up last week to region favorite Knott County Central.

In the district final last week, Coach Winston Lee’s Cougars went into halftime with a lead of 34 to 32. Disaster, however, struck in the third quarter as the Patriots outscored the Cougars 22 to 8 to take a commanding lead of 54 to 42 heading into the final frame. In that third period, the Cougars were held to single field goals by Caleb Stidham and Tyler Boggs, who also connected on a free throw, and Ryan Lebrun’s three-pointer.

Boggs and Stidham led the Cougars in scoring, with 14 and 12 points. Greg Kincer and Parker Williams each scored 10 points, and Lebrun contributed nine. Rounding out the Cougar scoring attack was Trevor Hardin with three points, Dylan Webb with two points, and Dakota Shepherd with one point.

Knott Central connected on eight of 13 free throw attempts in the final period to hold off the Cougars’ comeback attempt.

The game was played on Knott Central’s home court in Hindman.