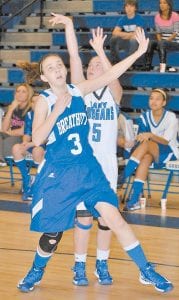 The 13-6 Letcher County Central Cougars visit Lee County this Friday night before returning to the “friendly confines” of the Cougar Den to defend their unbeaten (8-0) home record against a couple of regional heavyweights next week.

First however, the Cougars must host a solid Estill County at 4:30 p.m. on Saturday afternoon. Knott County Central comes to town January 29, with Cordia scheduled to arrive on February 1. The Lions also have a victory over Hazard this month.

The visiting Cougars trailed at the half, but rallied behind he inside/ outside play of forward Dylan Kincer and guard Cody Gregory to claim the victory January 19 at Alice Lloyd College.

Kincer, a 6’4” junior, and Zane Blair, a 6’5” sophomore, took control inside early and led the Cougars to a 17-10 lead by the end of the first quarter. The Crusaders, led by some deadly outside shooting from Matt Kidd, rallied to claim a 28-26 lead by the break. Kidd finished with a team-high 17 points but was limited to just a basket in the fourth quarter. Juwan Lynch and Matthew Ison finished with 12 points each for JBS.

The Cougars’ offense had a huge second half. In the third quarter, Zane Blair and junior Chippy Frazier picked up the scoring for the Cougars as LCCHS outscored the Crusaders 24-11 to take a commanding 50-39 lead into the final quarter.

Down the stretch, Dylan Kincer stepped up by scoring nine of his game-high 22 points. Cody Gregory and Zane Blair finished with 14 points each, and Chippy Frazier wound up with nine points. Sam Robinson scored eight points and Josh Owens finished with six points, while Max Hall chipped in with three points.