Boys on the road 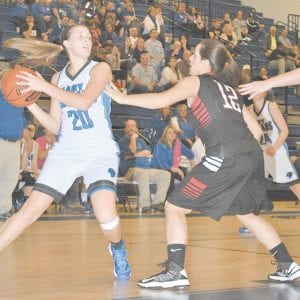 The Letcher County Central Cougars (12-6) are in the midst of a five-game stretch of away games. The road has not been kind to the Cougars this year, where they are just 4-6. However, the team a perfect 8-0 at home this year.

LCV finishes up this five-game road swing with games at June Buchanan School on Saturday afternoon, at Cordia on January 22, and at Lee County on January 25, before returning home to host Estill County at 4:30 p.m. on Saturday, January 26.

The Cougars used balanced scoring and opportunistic defense to offset some sloppy play in beating the visiting Eagles January 11, and run their unbeaten record at home to 8-0. The Cougars were guilty of 27 turnovers while Leslie County committed 23. Slowstarting

LCC led just 13-9 after the opening quarter, but then found a groove and pushed its margin to 31-21 by the half, and to 54-43 heading into the final period.

The Eagles, who received just eight points from their baseline players, stayed in the game from the perimeter making 6 of 13 from behind the arc. Senior guard Austin Sizemore led the 6-11 Eagles with a game-high 22 points — including 6 of 11 treys.

Sophomore center Zane Blair turned in a double/double of 11 points and 10 rebounds. Blair also had three blocks and two steals.

For the game, the Cougars made 24 of 44 field goal attempts for 55 percent while limiting Leslie

The host Cougars struggled early with the Crusaders before 6-4 junior forward Josh Owens took over and led a huge rally that allowed LCCHS to take control in a critical district matchup.

From this point on, Josh Owens, with some help from junior guard Chippy Frazier, scored the final five points in the first quarter to push LCC’s lead to 18-14 heading into the second quarter.

Over the first six minutes of the scored two points each for the 13-5 Lady Cougars.

This was a game of two halves with LCC enjoying the hot hand in the first half. Led by Kelah Eldridge and Julie Cornett, the Lady Cougars jumped in front and led 17-7 after the first quarter.

LCC extended its margin to 19-7 early in the second quarter before the Lady ‘Cats, led by their guard trio of Brianna Fraley, Rachel Smith and Taylor Rowe, engineered a major rally and led 28-27 at the half.

Shelby Valley led 41-36 at the end of the third quarter and 48-39 midway of the final quarter before sophomore guard Courtney Brock came off the bench to rally the Lady Cougars. First, Brock nailed a trey and then a second, and then she came up with a steal and a basket, and LCC had closed to within 48-47 with just over three minutes left to play. Brock finished with eight points.

Shelby Valley pushed back and went up 53-50 before Kelah Eldridge’s deep try from straight away tied the game inside the final 30 seconds.

A foul call against LCC on a scramble for the ball in the paint sent Rachel Smith to the charity line, where she converted a pair with seven seconds left. Smith added another pair after a technical was assessed on LCC’s coach, Dickie Adams, for protesting the foul call.

Julie Cornett led LCC with a double/double of 15 points and 13 rebounds. Kelah Eldridge finished with 13 points and a gamehigh seven assists.

Shelby Valley committed only nine turnovers while forcing LCCHS into 19, which resulted in the Lady ‘Cats finishing with 17 points off turnovers. LCCHS outrebounded Shelby Valley 33-23 and shot 54 percent on 22-41 field goal attempts to Shelby Valley’s 39 percent on 20 of 52 from the floor. The difference was at the charity line, where Valley converted 8 of 14, and LCC made just 2 of 5.