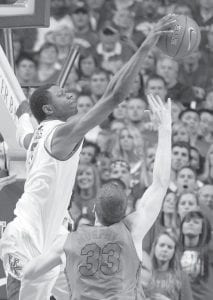 Despite a pair of close losses to ranked teams last week that were sandwiched around their blasting of Cordia, the Letcher County Central Cougars climbed two notches in the 14th Regional standings in Dave Cantrall’s poll this week in the Lexington Herald-Leader.

Perry Central (20-4) and Knott County Central (21-2) continue to be ranked first and second in the regional standings with Breathitt County (17-4) third and LCCHS (15-11) ranked fourth.

Hazard and Buckhorn, which are fifth and sixth respectively, are the Cougars’ next two opponents. LCCHS plays at Hazard (14-9) Friday night and then hosts Buckhorn (17-5) next Tuesday night, Feb. 14. The Cougars end their regular season at home against Pike County Central on Feb. 16.

The second-seeded Cougars take on third-seed Cordia on Tuesday, Feb 21, with the tip-off at 6 p.m. The district championship game is scheduled for 7 p.m.

The host Cougars attacked the short-handed Lions relentlessly right from the start in the easy win Feb 3. Despite clearing their bench early in the first half, the Cougars still set a school scoring record. This victory came just 10 days after the visiting Cougars rolled over the Lions 85-53 on Jan. 24. Senior Kendall Ballou, who led the Cougars with 30 points in the earlier victory, proved unstoppable again by hitting 15- of- 20 field goal attempts to finish with 34 points.

LCCHS jumped to a huge 33-5 advantage by the end of the first quarter and increased its margin to 74-15 by the break. The Cougars broke the century mark at the end of the third quarter — taking a 100-33 lead into the final period.

The Cougars’ missed shots — both early and late — allowed the visiting Patriots to pull away in the final minutes of the game for the victory.

The 17th-ranked Patriots enjoyed a single digit lead for most of the game, but had to rally from a 43-43 tie early in the fourth quarter.

Freshman Cameron Justice scored six of his gamehigh 26 points in the first quarter as the 21-2 Patriots built a 14-7 lead over the cold shooting (2-of-12 field goal attempts) Cougars.

Logan Johnson’s threepoint play with 4: 02 left in the second quarter cut KCCHS’s lead to 24-21. The game was halted at that point as the 6’2” senior was presented the game ball in recognition as the all-time leading LCCHS basketball scorer.

Despite poor shooting and eight turnovers, the Cougars kept battling and trailed just 32-28 at the half to the heavily favored Patriots.

LCCHS’s Logan Johnson defensively limited Justice to just a pair of late free throws in the third quarter and the Cougars entered the final quarter down just 43-40.

Johnson’s second threepoint play of the game tied the score at 43-43 with 7:19 left to play.

A 6-0 run by the Patriots extended their lead to 49-43 with 5:30 left to play and KCCHS then became very deliberate on offense. LCCHS hit just two-of-seven field goal attempts over the final five minutes and just four- of- 11 from the free throw line in the final quarter while KCCHS converted 12-of-15 free throws down the stretch to pull away.

Senior Zack Davis, who finished with 23 points for the Patriots, was eight-of-11 from the charity line in the final five minutes. Davis also pulled down five rebounds and came up with four steals. Simon Christon contributed five points and a game-high tying six rebounds and two steals.

Kori Stewart was limited to 11 points and four rebounds. Cody Gregory chipped in with eight points, four rebounds and a gamehigh four assists. Kendall Ballou wound up with six points while Trenton Whitaker and Sam Robinson added three points each.

For the game, LCCHS made 18-of-46 field goal attempts for 39 percent. KCCHS made 18-of-34 for 53 percent. The Patriots outrebounded the Cougars 26- 23 and forced LCCHS into 14 turnovers while making just nine.